Even if you haven’t heard of Ace Norton, you’ve probably seen his videos. A filmmaker and music video director, Ace has worked with some of the biggest names in music, putting his unique spin on pop culture imagery, fashion, stop motion animation, and retro genre shout outs. I sat down to talk surfing, skateboarding accidents, smoking blunts with Snoop Dogg, and what constitutes proper bank heist attire. Also a little about filmmaking and his prolific career since childhood, and why he likes blowing things up so much (even if that last one is pretty rhetorical). 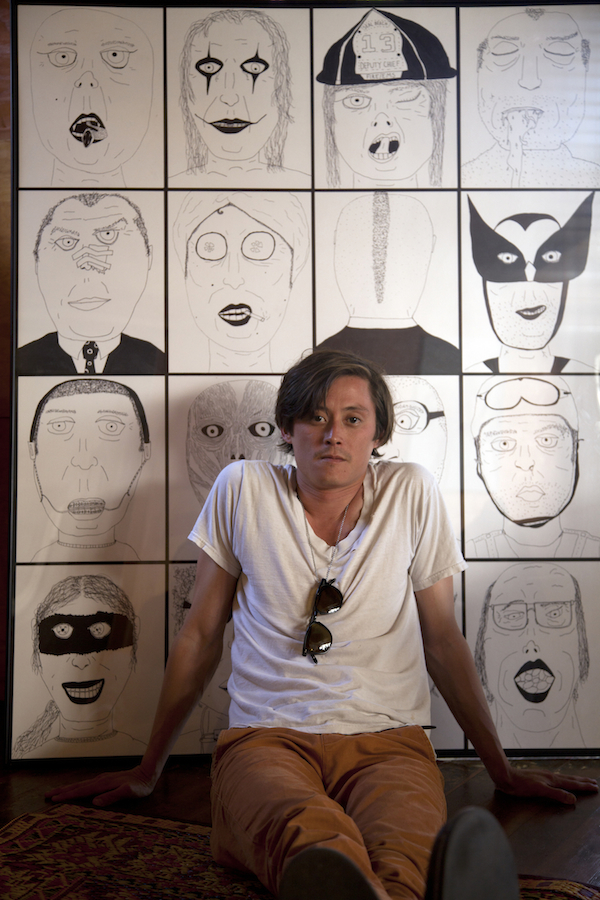 Jonathan Mayor: Where are you from and how did you first get into directing?

Ace Norton: I’m born, raised, and currently reside in venice beach, California. As a kid growing up around LA, filmmaking is something you're exposed to but it wasn't what I was into initially.

JM: What were you into initially?

AN: Skateboarding, being a kid.

JM: When did you start making music videos? Weren't you still a kid?

AN: As a kid I wanted to be a pro skater, but when I was 13 I shattered my tailbone jumping off a flight of stairs. For 6 months I had to sit on an inflatable doughnut cushion and couldn't do any physical activities. After awhile, I asked my dad if I could borrow his hi 8 camera. Sidelined from skating, I started going home everyday and directing, editing, and starring in these short films. They were all pretty bad but it was a fun testing ground. A great way to kill time, learn, and make mistakes. So I guess the whole filmmaking thing sprung from me literally breaking my ass.

After that I started making low budget videos for friend's bands in college. I’d go to shows at The Echo and Spaceland and convince the bands that I could make cool, inexpensive music videos on shoe string budgets. This was during the 90's and kind of the music video heyday when everything was ridiculously pricey so I was offering a different avenue. A lot of the bands were willing to take a shot on a cheap director and I was building my reel, so it was mutually beneficial.

Steve Aoki actually gave me my first “official” directing gig, through his record label Dim Mak back in 2002. It was my very first commissioned job through a record label which at the time was a really big deal for me. I couldn’t believe I was getting paid for doing something that I loved and enjoyed and was kind of already doing anyway (and it sure as hell also beat the job I had at the time as a bus boy at a place called Capri on Abbott Kinney).

JM: Your work is pretty spectacular, surreal, wildly colorful, and a lot of fun. What themes and ideas do you find surfacing or resurfacing in your work? What's it all about?

AN: I want things to be entertaining. To me, that’s the most important aspect in anything I do. That applies to narrative stuff, animation, fashion films, music videos. Does it move? Does it flow? Do you care about the idea and the characters and want to know what happens next? Are you on the edge of your seat? These are all questions most important to my work, regardless of the genre I work in.

Lately, I’ve been obsessed with themes of isolation and boredom. The idea of these lonely and privileged out of touch, Howard Hughs-ian characters who have everything and nothing at the same time. Characters going through some sort of crisis in their lives- emotional breakdowns, or unexpected outbursts or pent up angst. I just love this world - the look and the costumes and the production design- it’s all very elegant and classy.

JM: Your work is very filmic and (at least loosely a lot of times) narrative. Any plans on making a feature? What would the dream project be? Any genres in particular you'd love to deal with?

AN: I was going to do a movie last year but it didn’t end up working out. I’m working on another one at the moment so hopefully that goes. The feature game is different than the music video/commercial/short content game, which is more immediate. In my experience feature development is fun but you need to have patience because it’s also a very long waiting game.

JM: What/who are your biggest artistic influences? (I see there's some horror in there).

AN: Hah, yeah I grew up loving horror. My grandfather showed me Reanimator when I was 10 years old (which is the most fucked up, gruesome, over-the-top gore fest imaginable) and I remember having nightmares for weeks. I knew what I was watching was fake, but I was amazed how something so fake could manipulate my emotions and mold my fears so much. It sounds traumatizing but I think it made me realize the power of cinema.

In terms of influences, honestly, it’s a mishmash of anything and everything. Godzilla and Pee Wee’s Big Adventure were my sick day movies as a kid, but my father (who was also a director) exposed me to some of the greats like 8 1/2, Apocalypse Now, Touch of Evil, and directors like Kurosawa, at a very young age.

Honestly, I have no bias. I love bad movies and I love good movies across all genres and I think that’s evident in my work. It's also why I tend to experiment in all genres (whether horror, comedy, fashion, animation, or the arty high brow stuff). Like I said before, I think the one common through line is that it needs to be entertaining. That’s ultimately what’s most important for me.

Scissor Sisters "Any Which Way" / Directed by Ace Norton

JM: How influenced are you by fashion and design, or by culture in general?

AN: I’ve been doing a lot of these fashion films lately and I’ve been blessed to be working with some really great designers like Rhie’ and Jenni Kayne who respect their directors and give them tons of creative freedom without the politics and b.s. you might encounter with record labels or ad agencies. I love the fashion world. For me, it’s a visual playground that’s so wildly creative for directors. I enjoy this medium more than anything at the moment.

JM: What's the part you enjoy most about what you do? What excites you the most about it?

AN: I enjoy collaborating with people. I like solving problems with my friends and being around people who are equally as excited as I am. The three best moments of the job are: the moment you get the job, the moment when you wrap the job on set, and the moment you release your work (that is, if it turned out alright). All the stuff in-between these moments (the writing, the pitching, the editing, the meetings, battling the day, money, budget) can be agonizing and masochistic. In fact, every time I can’t believe I'm actually putting myself through this painful process again and again. For some reason I keep doing it though, and finding purpose and happiness in the process.

JM: What's the most important thing you've learned about collaborating? How does the collaboration fuel or change the process? And how is it different with different people? How can it be difficult?

AN: Collaboration is so important to the job. If you don’t like being around people then you probably shouldn’t be on set or directing. What directors do is a balancing act of listening and communicating and adapting.

I tend to keep a pretty fun/relaxed set. I tend to give people wings and the freedom to do what they want creatively. If I trust their taste, I trust their vision, so I’ll set parameters but let the performer or artist or animator or editor fly pretty freely within those boundaries. It’s all about developing trust with the people you work with…having a vision and letting the people around you do what they do best.

JM: What's a question you've always wanted to be asked in an interview and haven't been asked (and what's the answer)? And what's something you wish more people knew about you if it's not the same answer?

AN: I’m a pretty good surfer. I mean, how are you at surfing? Pretty good.

JM: What are you working on now? What work do you have coming up?

AN: I have a short film/ fashion film coming out soon. I’m developing a movie. Then just a lot of writing and pitching in between. It's always a grind.

JM: Take us through a day (off) in the life of Ace Norton.

AN: Surf, exercise, read, write, hang out with my friends/drink beer.

JM: Where does (your) creativity come from?

AN: The beer! Kidding. Partly. People’s brains work in mysterious ways. Some people are naturally gifted at math and science, others are innately athletic. I think same goes with the creativity. I think it’s this indescribable gene you are born with and either have or you don’t. I also think it’s something you can strengthen like any muscle in your body, through a great work ethic or through failure or perserverance. By failing miserably and then learning what not to do, or learning what you’re not so good at. Then the ability to pick yourself up from the ground at your lowest point and stand back up and be fearless, not caring about the consequences or what people may think. That sort of stuff that can cripple you.

JM: I’m not asking you to play any favorites but what have been some of your "favorite" professional experiences (or accomplishments) this far?

AN: It was a bucket list moment when I shot with Snoop Dogg, and then after wrapping, got high with him. Kind of a dream.

JM: If you could direct a music video for anyone (living or dead) who would it be?

AN: Here are 3 off the top of my head: Iggy pop “Night Clubbing”, Beach Boys “Sloop John B”, Velvet underground “Sweet Jane”

JM: What advice do you have for younger filmmakers?

AN: I remember watching Conan Obrien’s closing monologue when he got booted off the Tonight Show, and he said something really simple and poignant which stuck with me: “If you work really hard and you’re kind, amazing things will happen to you.”

JM: Any other advice or parting words to live by? Any personal mantras?

AN: “I've missed more than 9000 shots in my career. I've lost almost 300 games. 26 times, I've been trusted to take the game winning shot and missed. I've failed over and over and over again in my life. And that is why I succeed.” - Michael Jordan


Thanks to Ace. Conversations on “Space Jam” and other topics saved for later dates. JM