My drawing/painting hybrids are based on intuitive gestures.

A trail is formed of personal hieroglyphics, a compilation of seemingly meaningless symbols form imagery that mimics nature. These hieroglyphics reflect a concern with recording personal information that may be lost in translation when one is not given access to an internal language. The repetitions of my marks become an activity of preserving and rewriting history. The works aim for some personal fusion of grace and vulgarity; these paintings are a celebration of obsessive acts of recording personal experience and newly formed memories. 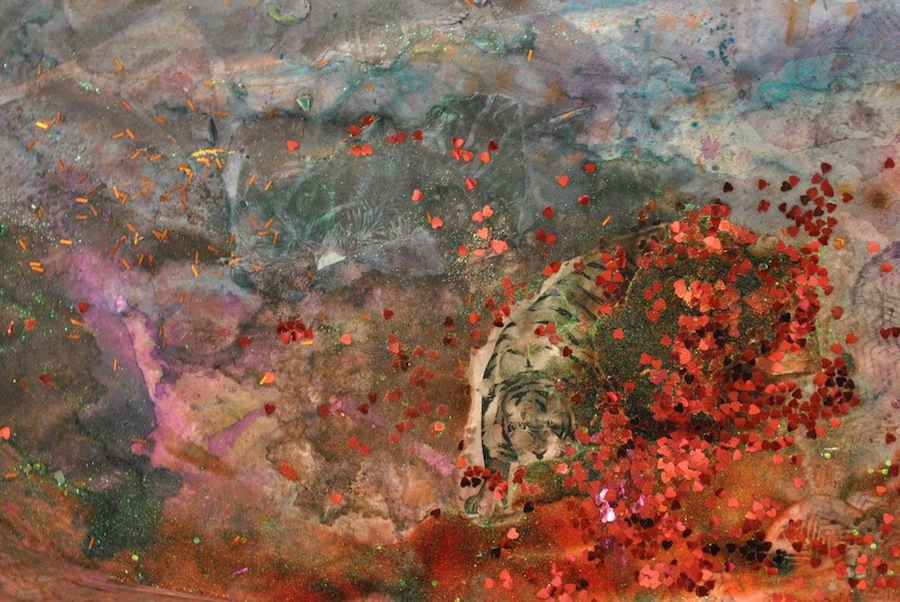 I Will Eat Your Heart, by Alex Nuñez

“I Will Eat Your Heart” is a self-portrait depicting an all-consuming tiger emerging from a tropical landscape. This piece incorporates the tiger as my spirit animal, a subject that repeats itself throughout my oeuvre. Primarily a solitary nocturnal hunter, this work depicts an animal raring to pounce its prey, veiled by a cluster of confetti hearts. This piece contains images that are blurred, both revealed and concealed with multiple washes of color and confetti. The animal is captivating, unpredictable, and vulnerable. The layers mask and protect the animal, yet its strength is undeniable. As an artist, I must expose my emotions and personal experiences to the public by manipulating color and texture in a seductive manner that lures the audience in, to find deeper meaning in my work. The tiger’s gaze is something that instills a curiosity that leaves the viewer longing to be submerged in its environment. 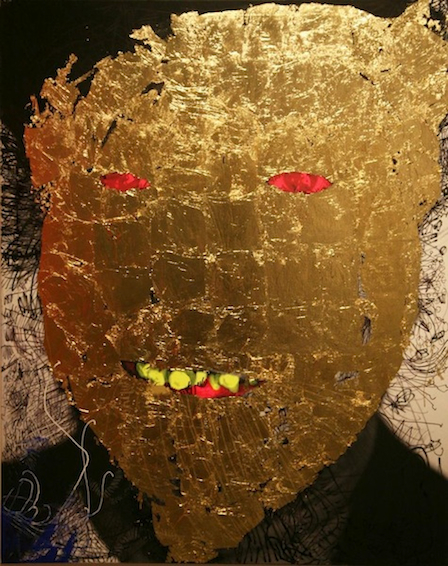 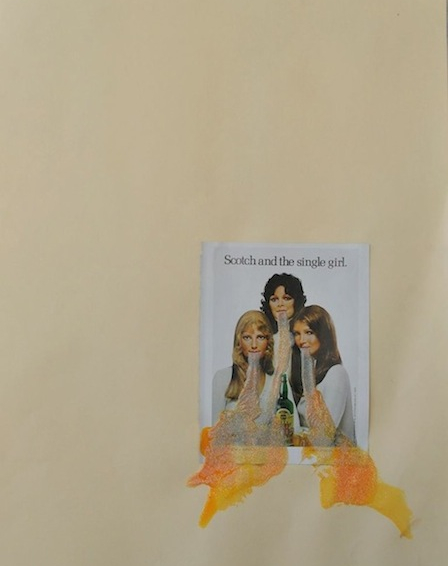 10:04am: Sullivan Street. I wake up in the morning to my guilty pleasures; Instagram (@Shockingly_Unambitious) and Café Bustelo, before sitting down with my laptop to get my daily news. This consists of emails and blogs such as DListed, followed by Hyperallergic and Go Fug Yourself.

11:45 am: Antiques Garage Flea Market. I browse through vintage postcards, old magazines and jewelry. These found images are collaged into my work, my inspiration alternates from 1970’s magazines to what I’ve found online.

1:35pm: Pearl Paint. They have the largest selection of confetti at this store and this really amazing glitter tempera paint I mix with their iridescent loose pigment. I visit this place frequently for all things shiny. I ride my bike over the Manhattan Bridge to my studio in Gowanus. NAME DROP: Lorenzo Martone Cycling.

2:47pm: Four & Twenty Blackbirds. I'll stop there and pick up a sugar fix or a coffee. Yes, coffee AGAIN.

3:15 pm: 94 9th St. I arrive at my studio and there are multiple pieces in progress. The floor is covered with a large waterproof tarp and several works on canvas with large pools of paint are in their drying stages. Some pieces are on the walls setup for their fourth or tenth layer. There are footprints all over each piece, which are the result of running back and forth between each work. I setup a projector and watch anything and everything while painting. My work is based on a constant intake of imagery, music, nightlife, nature, gossip websites, movies, magazines, crap television, endless YouTube searches, etc. This requires a lot of mediums going at once – the projector screening Arrested Development, Woody Allen movies, playing Velvet Underground or Wu-Tang in the background and flipping through 1969 LIFE Magazine pages scattered across the floor. Whatever is in the studio ends up on canvas in some way, shape or form... confetti, glitter, wax, espresso, chalk pastels, paint, tequila, glue, rocks. This is a spontaneous way of making marks that balance out the meticulous drawing. Each piece becomes a buildup of day-to-day life; the photos and objects that are found become transformed in a new space.

9:15pm: Soho House. After hours of working in the studio, I grab dinner and drinks. My friends and I frequent the Soho House in the Meatpacking District. Tonight Yuna is performing.

11:45 pm: The Standard. We stop by The Standard to have a nightcap before parting ways. This is probably my favorite view of the city at night.