I was in Santa Monica last month, bleary from a shoot that had just finished in New York and prepping one that would soon follow in Richmond, CA. I grabbed a coffee with Kaitlyn @ 1985, and was surprised she asked if they could feature me as an artist.

Firstly, the filmmaking process never feels that artistic to me, it’s more like organizing a scout camp or being a wedding planner - marrying ideas you had so long ago that you’ve forgotten you had them. It’s just - how will we pull them out of the chaos of the world?

Secondly, it wasn’t that clear to me who the artist was. It was kind of me – and kind of not.

Let me start from the beginning. A few years ago I created this program called DRS, making music videos with at risk / street involved kids. I commission songs from them based on a theme (this latest project was “fatherhood”), and, working with their local youth center, we develop the song and then materialize it with a crew borrowed from my work in ads and movies… and we shoot the video.

People ask me why I do it, and I don’t know. In essence, it makes me quite poor, but it opens up my heart.

It’s a beautiful, raw process that started out as a YouTube clip thing and is ending up as a documentary and music video feature film criss-crossing America, digging up stories and songs of love and anger about fatherhood.

It only seemed fair if I split the artist-person-ness with one of the young people. So I interviewed her and she interviewed me.

Her name is Jamaya Walker and I met her through RYSE Youth Center (who put the music track together for DRS' most recent project). She’s seventeen, and from Richmond, in the San Francisco Bay Area near Oakland, where her Dad was shot dead, and this triggered her to start writing amazing spoken word pieces. She’s funny and vibrant. Here are the questions I asked her. 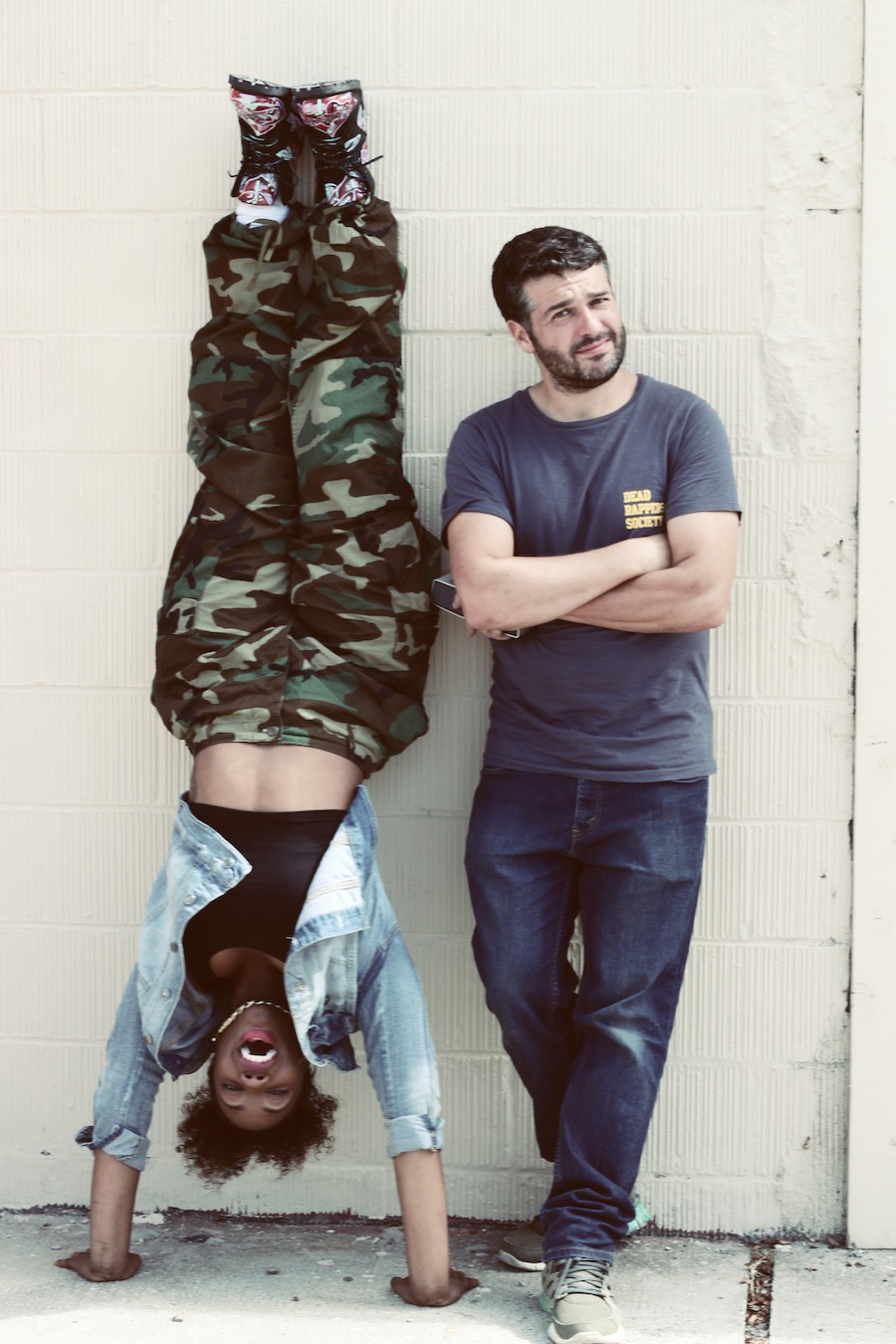 Ben Gregor: Tell me something crazy.

Jamaya Walker: Something crazy about me, that is true, is that if it was not for the murder of my father I would have never found the artist that has been living inside of me. Throughout my tragedy I have found my blessing and that is writing. My father will always be alive through my work and I thank god for helping me find sunlight through my black cloud.

BG: Tell me about your part in the Fatherhood song.

JW: The spoken word piece I did at the end of the Fatherhood song was about a small portion of my relationship with my father. I grew up with a father who felt like it was more important to provide for me than attend things that were important to me like cheerleading competitions, track meets, and school events. I often looked in the crowd for him but he was never there. So in my spoken word piece I am saying that I did not need all the material things, I would rather have memories of him being there when it meant the most to me, because at the end of the day material things can’t keep your heart warm like memories can.

BG: Tell me about Richmond, where you're from.

JW: Richmond is inspiring to me but not in the way people would assume. I feel the city needs a wakeup call, and fast. Someone needs to bloom from the cracks of the broken city and put it back together. This city inspires me to want to help do something to change the attitude and outlook on life that the majority of the residents have. It is time to rebuild Richmond!

BG: Are you an artist?

BG: If only one of us could be the artist here who would it be?

JW:  What are you talking about, Ben? 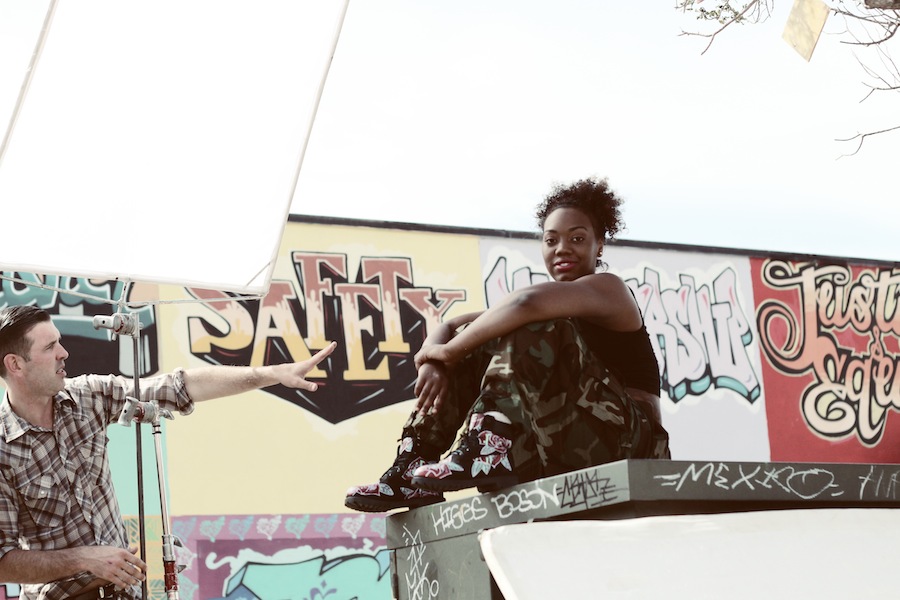 Jamaya Walker: What has made you want to travel around the world and shoot videos for young people?

Ben Gregor: I’m bored of promoting myself and seeing others promote themselves. People don’t share their gifts and access enough. If I made wheels, I would share those wheels. So I share the process of idea conception and production with young people who have been globally marginalized thanks to austerity and also thanks to creative people who hold the keys to their industries but spend their time googling themselves and going to private gallery openings. Have you ever driven by a private gallery opening? Basically it is a bunch of Herberts holding glasses of white wine. It’s the exact opposite of what I think art should be. Art should not be private. It should be open and loud and that’s why I do DRS.

JW: How are the stories you heard in the Fatherhood song different or similar to the stories of fathers in the UK?

BG: Well, I am a father of two young kids, and so that’s my comparison - a personal one rather than a geographical one. The intensity of passion between kids and their parents is universal, even if it’s neglected. One thing it really made me aware of, is how kids will always say their Dad left them (if their parents relationship breaks down or was never there). “He left me.” Sometimes that’s fair and sometimes, it’s not.

Doing this project I quickly became aware that I was in danger of making an anti-man film. So I’m tempering that at the moment, and engaging with some ex gangbangers fresh out of prison - Hispanic guys - to write a track about fatherhood and incarceration, of missing their kids, of being locked up, of knowing that their kids feel like they’ve been abandoned when the truth is more that they’ve been brutally separated.

JW: How has hearing the stories of Fathers in the Bay Area changed your outlook on fatherhood? What will you do differently to make sure that your kids do not feel like the artists who wrote the song?

BG: As a Dad, you can’t promise to never let them down, to always be there. You can damn well try though. I guess I do that. It does get ironic when I tell them I can’t be at their school performance because I’m shooting a film about absent fathers. That really pisses them off actually! And fair enough.

JW: What about shooting videos for young people excites you and makes you want to keep doing them?

BG: It’s addictive to see those eyeballs light up and the passion come rolling out. It’s a privilege. It jolts me out of my selfish concerns. It means I get to buy a lot of pizza for people and briefly get into the orbit of their lives - and at the end - I get to give them a music video.

JW: Could you see yourself doing anything else? Why or Why not?

BG: Right now, I want to finish this movie. This project has grown and blossomed and it’s all I’m thinking about. Thanks for being a part of it, J.