Imagine a world where pygmy horses stroll the Mojave Desert beside two men, one wearing an orange puffy vest with no shirt underneath and the other sporting a pair of daisy dukes and white go-go boots.  As a mint 2006 Subaru Baja, “the mullet of the auto world,” explodes in the distance, an albino lizard man swoops past on a Segway, a pair of diabolical labradoodles and combatting bearded dragons in his wake.  The two men pop the tops off two Zima wine coolers, drop jolly ranchers into the fizzing, milky-colored beverage and cheers before sneering into each others eyes and participating in a jump off.  Imagine this world and enter the mind of Doug Manley. 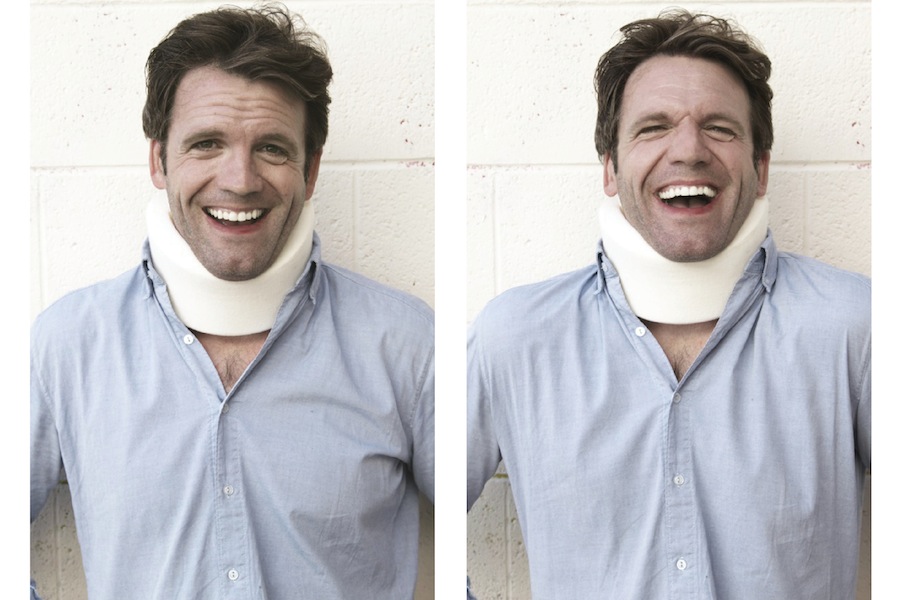 Recently I caught up with, Manley – screenwriter, actor, comedian, director – in Los Angeles. Being the king of Hollywood, naturally he was en route to an appointment for new headshots, so I tagged along. Even his current mandatory neck brace couldn’t stop Doug from making the camera swoon. When Doug Manley’s not living the life of a hotshot star, he can be found chasing around his picture-perfect blond, one-year-old-plus daughter, Pepper; yielding to Pepper’s demands to take his long-haired Chihuahua-type rescue on three walks a day; or entertaining Charity -- his wife and quite possibly the coolest woman in the world -- by pretending to rob his Teddy Bear Cat, Ted, at gunpoint while holding him limp against the wall. However, like Ron, the lead character in his latest screenplay, Bar Fighter, Doug heralds from humbler grounds, the Hollywood of central USA: otherwise known as Chanute, Kansas. Doug Manley’s comedic genius, small town origin, and the prowess of his imagination can be found in this excerpt of Bar Fighter:

"When I was younger I was a really pasty, overweight kid with really no athletic ability or book smarts.  So that kind of helped usher me [into comedy and writing].  As you can tell, I'm an Adonis now.  In college I started working at a place called Comedy Sports in Kansas City and then moved to Chicago to study at the Second City, their conservatory and their writing program and that's where I really got into writing and started writing screenplays and started a sketch comedy group there called the Mantasticks.  That taught me if you're going to name a comedy group, hop on Google, make sure there's not an all male, gay dance band with the same exact name because there were a lot of disappointed people.  Anybody who thought that they were going to see us and saw them loved it.  Anyone who thought they were going to see them and saw us, were like, ‘These guys are out of shape.  They can't dance.’”

While working at Optimus, the Chicago commercial postproduction house where Manley and I met, Doug created the moniker “Modern Imbecile” and made a myriad of short films that can be found with much accolade on Funny Or Die.  It was also in Chicago that Manley met Kevin M. Brennan, his writing partner, at Second City where together they formed the Mantasticks.  After moving to LA, Manley and Brennan issued another Modern Imbecile release, the 2010 feature film, "Planet World."

Filmed in the Mojave Desert over a period of 6 days, “Planet World" was shot for $10,000 and most of that was permits and then there's a tiny pygmy horse in it, turns out those things are expensive.  The horse was $900/day, but what a pleasure to work with him.  It'd just been on "The Office" the week before so his name is on the top of the poster Sherlock," Doug explained.  Running at 70 minutes, "Planet World" is synopsized on IMBD as: “Two of Hollywood's hottest stars accidentally become stranded on an alien planet brimming with unspeakable danger.”  "Planet World" showed at the Austin Film Festival, Newport Beach Festival, New Filmmakers Los Angeles and the Netherland’s BUTFF.  At Slamdance it won the“The Road To Park City” award and “Best Comedy” at Atlanta Underground Film Festival.

"Slamdance is a great film festival and [when we arrived] nobody knew who we were, so that kind of established us [Doug Manley and Kevin M. Brennan] as a comedy team.  It's a funny, small weird film so we got some distributorship. We got it in some towns I think will like it.  We got in Dubai.  It's playing in Iraq…I'm not sure how well puns and boner jokes translate. Well, boner jokes, I'm sure they do."  When I ask him whether he feels like a celebrity having a successful film at film festivals and surefire Arab fan base, Doug answers, "No. I was worried they'd want their money back."
This past winter, Kevin and Doug teamed up with Slamdance again to do a series of short films, “Idiot’s Guide To Making Movies For Dummies,” sponsored by Movieline. These short films, detailing the filmmaking process in satire, star familiar characters from Doug Manley’s repertoire. Doug plays, “Don,” much akin to “Ron” in Bar Fighter, and Kevin plays albino Lizard Man, very much like Ron’s mentor in Bar Fighter. Considering how hilarious these shorts are and what a comedic genius Doug is, I can’t help but feel like Doug deserves something more, and also that the world deserves to see more of Doug Manley.  So I ask him, “In an ideal world would you be a big Hollywood star or writer or director or would you be more indie?” Doug replies, as always, calmly and modestly, "I was lucky enough to get in a good group of guys.  Some of them are on TV shows now, you know like, Kevin [Brennan] was just in a movie with David Cross and Julia Stiles, so it's nice knowing all those guys and they're always really great to help out.  I love writing, so I'd love to keep doing that.  Anything else, as long as we can just goof around and stuff like that.  Success has never really been a big thing for me, which is good because I've never really been successful. So that's worked out really nice."

I’m 100% sure that Doug’s selling himself short here, so I try to ask, instead, which of his work is he most proud.  His answer is "Bar Fighter" – “I think it's a really funny character and I've gotten a really good response from it so hopefully it will lead to something. Just cause I'd like to see it done. But, other than that, I don't know, you write something and you're really proud of it and then you go back 3 or 4 years later and it's just really embarrassing. My biggest fear is just not being able to think of anything. So as long as I can, it doesn't have to be good, just as long as I'm cranking out stuff."

Structurally, "Bar Fighter" is a parody of the 1987 Patrick Swayze film, "Roadhouse." Doug cites this film as one of the greatest ever, of all time. To put "Bar Fighter" in a nutshell, Manley references Roadhouse, "Instead of Patrick Swayze being called in to fight at a bar, they call Ron and he can't fight and he's super incompetent. I got 110 pages out of that one idea…I know people like [Ron] and I’m like this, too.  If I have way too much to drink, which is very rarely, hardly ever, for some reason my voice takes on a kind of a bragging tone where it sounds like I’m bragging but then I’m just talking about how idiotic I am.  So I thought it’d be funny, some guy who sounds like he’s bragging but he’s just talking about how incompetent and awful he is.”