In the spirit of curation as an art form itself, I caught up with my namesake Georgie Okell, a radio/TV presenter, DJ and all around music industry bad ass, who continues to invent, evolve and preserve the discovery of modern music. 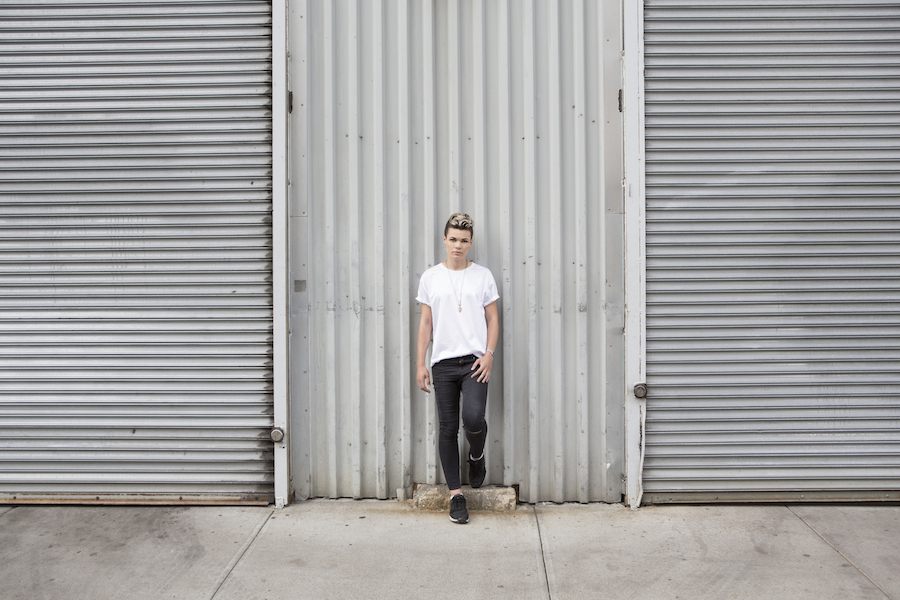 Hailing from Chester in the UK, 26 year old Georgie made her name when she became an established member of the T4 presenting team on Channel 4 in UK in 2010. She was also a regular host on Channel 4 music breakfast series, Freshly Squeezed, and fronted youth campaigning series Battlefront. She has gone on to co-present programming around the Mercury Music Prize, NME Music Awards & the Cannes Film Festival.

In 2013, Georgie co-devised, co-hosted and co-produced the first ever live online talk show series in the UK, The Fox Problem.

Since her move to NYC she has hosted a weekly music show, Pop Goes the Future, on the legendary and iconic East Village Radio, is a music and fashion writer for VICE and at the beginning of this year she joined the US Fuse TV network as a host on their nightly music news programme, Fuse News.

Georgie and I connected post the devastating closure of East Village Radio to find out a little more on this, her love of music, and what she has up her sleeve next.

Georgie MacEchern: Georgie, thanks for taking the time to chat with me, I am really excited for one to get to interview my namesake and feel as we have very similar interests both having a love for music & DJin.

Firstly tell me how long have you been in NYC now and how you are finding it over there? Personally I love that city and find it has an energy about it like nowhere else.

Georgie Okell: I’ve been here about 18 months now, and there is nowhere like it in the world. It’s certainly not the easiest place to live, and I think I’ve grown a pretty tough skin since moving here, but I love it nonetheless. There’s an energy and a drive here that is so constantly exciting and inspiring.

GM: Tell me a little about yourself and how you got into music in the first place.

GO: Music has always been there, but when I got to university that’s where I started DJing and doing radio. Me and my friend Rosie would do a weekly party called Hustler Disco, and my radio show was an early version of what I’ve been trying to do with radio ever since, which is to bring new artists though and showcase the bands and the songs on the verge of breaking big. After university I got a job working at a record label, then somehow ended up on television, and I’ve been winging it ever since.

GM: Music has always played a big part of my life since a kid. Who were your major influences growing up?

GO: They were somewhat eclectic, I went through every possible phase that was possible to go through and I was fully committed to every one- from rap to pop to heavy metal to French disco/electronica, I would find certain tracks or artists and just get completely sucked in to their world until I discovered something else.

GM: Tell me how you got the part with the mega T4 presenting crew – as that was a life changer for you and your career right?

GO: It really changed everything for me. I was working at the record label and a colleague came back from a meeting at T4. She mentioned to me that they were auditioning for a new host and I said ‘I could do that’, half meaning it because I’d grown up watching the show and often thought about it, but also just making conversation. Anyway, she called one of the talent scouts over at the show and I ended up landing a screen test. Several screen tests later, they offered me the job, and what followed were some of the most amazing months of my life. I still can’t really believe things worked out that way.

GM: You then went on to a host some serious cool stuff alongside T4 including Freshly Squeezed for Channel 4, Mercury Music Prize, NME Music Awards, Cannes Film Festival and many more.  What are your most memorable moments from these?

GO: All of it was phenomenal. I got to travel a lot and meet fascinating people, including The Rock, who might just be my favourite person of all time. I got to interview him once in Rio and once in Hawaii. Both times his handshake nearly crushed my bones but it was worth it.

GM: You still close and in touch with your fellow T4 presenters? Both you and Alexa Chung are NY based now so do you get to hangout much over there?

GO: I see Alexa from time to time out here which is really nice, and I miss my fellow T4 presenters a lot. Spending every week in a studio with people who are the funniest and smartest humans you will ever meet is pretty special. Also, if Will Best is reading this, you owe me a FaceTime sir. 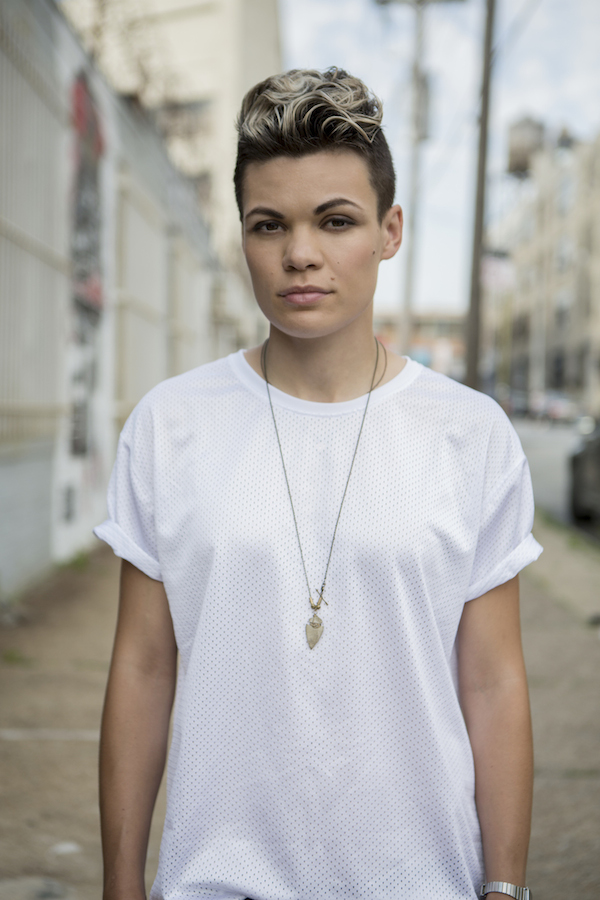 GM: Tell me about The Fox Problem, which you co-devised, co-hosted & co-produced. Must have been an incredible experience? What advice can you give anyone wanting to produce their own show?

GO: The Fox Problem came from wanting to change the way young women are perceived on television. Georgia LA and I would have endless conversations about the representation of young women in the media, so we decided to change it, and we created a live, online show, which I’m very proud of. We are now in discussions for the third series of the show, and we have some ridiculous ideas for it.

If anyone is thinking about producing their own show, my advice is DO IT. I’ve actually just finished shooting a pilot for a new series here in NYC with a couple of friends, and honestly if this city has taught me anything, it’s that while you are talking about doing something, someone else is out there actually doing it and making it happen. If you have an idea, borrow a camera and go film it, have your friends look at it and don’t be scared of negative feedback at the beginning. Make something you’re proud of, and if you believe in it other people will too. As a friend said to me recently about a film he made for Tribeca, which is now doing incredibly well: ‘If you build it, they will come.’

GM: On moving to New York, how was that transition for you?  Any plans on returning to the UK or is NY home for you for the foreseeable future?

GO: I’ve by no means turned my back on London or the UK, or any other city for that matter. New York was always somewhere I wanted to live, and right now it is home, but who knows where life will take me next.

GM: How did your amazing residency hosting Pop Goes the Future for iconic East Village Radio come about?

GO: I listened to EVR in the UK, where they had a pretty sizable following, and as soon as I moved here I hounded the station with emails and phone calls until the station manager Peter Ferraro agreed to meet with me! I did a demo for them, then a live demo on air, then I covered a show one week, then finally they gave me my own weekly slot. They were always very particular about how they curated their show roster, so I really had to prove myself, but it was nice to know they cared so much and it made me really step up my game.

GM: I think everyone who knows East Village Radio was shocked and saddened to hear about its closure last month. Very sad times.
How did that all come about and how was it for you being part of the team once the news was out?

GO: It was really, really sad. I am still really upset about it. The way licensing and regulations work for online radio services means that right now it is almost impossible for a station with a structure like EVR to survive, but it is SUCH a shame and such a huge loss to the East Village, to the music industry, and to internet radio.

GM: Any plans to keep Pop Goes the Future going in some capacity? Or do something similar?

GO: Absolutely, the Pop Goes The Future name lives on and we are building it as a brand and looking to expand into visual content as well as the radio show. The pilot we were shooting last week ties in with PGTF, so yes we have big plans. Stay tuned.

GM: For me as a DJ and sourcing new talent, SoundCloud is an integral platform for emerging artists. I also find there are so many interesting music blogs out there too.  Where do you source all your inspiration and new artists?

GO: I love Soundcloud, also Facebook is actually a great way to follow artists. The Line of Best Fit is my favorite music blog, I love everything The Guardian has to say about music. Other than that I just like to set aside whole afternoons to lose myself in some weird wormhole of music discovery that takes me to random corners of the internet.

GM: There is a lot of emerging talent coming out of the UK at the moment – in fact round the globe! Who for you are the ones we should be keeping an eye out?

GO: Out of the UK look out for Nimmo & The Gauntletts and Raleigh Ritchie. BIG things coming.

GM: NY is a mecca in my mind for underground talent – any exciting artists / bands we should be looking out for from over there?

GO: Wet are killing it right now, as are Slothrust- both supremely talented three piece bands with very different sounds.

GM: Georgie as this issue is focused on more established artists and figures would love your take on how to make it as a successful TV / radio / DJ presenter? What necessary steps and characteristics do you feel you need to make it in your industry?

GO: Work hard, take chances, be nice to everyone you work with, trust your own judgement but also accept the advice of others. If you’re DJing, watch your audience, play off their response and build your set around that. Never read your Youtube comments. Roll with the punches.

GM: Love your style. Has fashion always played a big part of your life?

GO: Absolutely not, I mainly dress like a 12 year old boy unless someone tells me to do otherwise.

GM: To round our interview off, what would be the key moments in your career so far and any exciting plans over next few months we should know about?

GO: There have been lots of great moments, but it’s always best to keep looking forward I think. This show that we just finished shooting is the single proudest thing I have ever worked on, so watch out for that. Both The Fox Problem and Pop Goes The Future have gone global this year too, so there is plenty on the horizon.

GM: Thanks a lot Georgie for your time and good luck with everything and I look forward to seeing what other exciting things you are up to next.