Issue No 17
1985 STUDIO
Springing forth at the ripe young age of 17 from South Africa’s otherworldly, vibrant street art scene, the artist known as Jack Fox is setting & breaking precedents right & left with his etchings & large scale characters, his work a confluence of children’s book characters, tattoo imagery, & text, in two dimensional frames, the scenes often bucolic & fabled pastures, grafted onto the urban walls of his hometown's various districts. The son of the celebrated muralist Faith47 & tattoo artist Tyler B. Murphy, Fox’ upbringing was as parapetic as his sensibilities & influences are diverse, with exploits reaching into the farfetched corners of Cape Town’s experimental underground music scene & filmmaking community — & all of this before turning of age. He has the enviable position of being nearly all-world, a global art presence, just as writers in consolidated urban environments would once strive merely to become all-city. To be certain, a force to be reckoned with, & one we are catching early on in its journey. 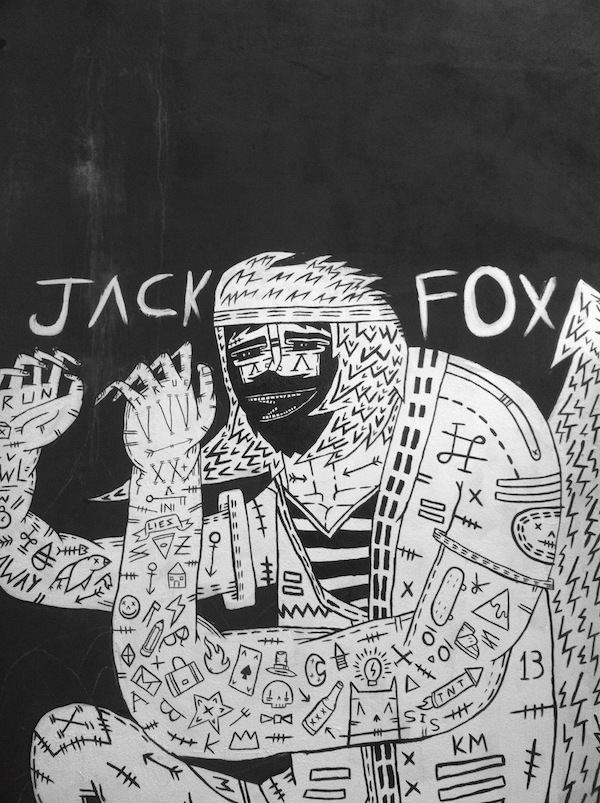 Evan Louison: Your characters seem to exist in a plane somewhere between human & animal, in an anthropomorphic state. Oftentimes, your rural settings contrast with the urban environments you choose to house your work. There seems to be a relation to fables & fairytale storytelling in this way. Is this something you were always chasing, or did it come about with time?

Jack Fox: There was never for me a conscious decision towards style, it slowly evolved from the first time I started drawing. I learnt to draw on a technical from watching cartoons as a kid, i never really drew any major inspiration style wise from any particular source after that. What i have chased since i was younger is trying to draw the images i see when i close my eyes.

EL: Talk about the change from your work as Cashril Plus to using your own name, & if the reasons behind the shift in monikers meant a transition in content & style as well.

JF: When I first started getting into the idea of painting walls I was really into graffiti. I chose the name fox starting out because I liked foxes as an animal and it was a short easy name to put up. One day I decided on the name Cashril Plus to replace. It was derived from the word casual. I really liked the idea of the word. To me at that time it represented being comfortable with everything. Years later I started leaning towards the idea of street art. I started feeling that my artist name no longer represented me. I wanted a new name that felt like the main character of my world. it needed to feel genuine to me so I combined Fox my first artist name with Jack my favourite simple name, that held a lot of archetypal attraction to me.

EL: How does being from South Africa originally inform your work directly? The street art scene & culture there is so rich, it seems a natural fit to nurture & explore those interests. You’ve spoken previously about how the will to travel has influenced your work. Were your seminal & formative experiences as much a result of being from South Africa as they appear to be from your travels elsewhere?

JF: I have drawn a lot of influence from my surroundings in South Africa but being around artists from a young age is what inspired me to really push forward and put my all into creativity, in particular being at my mom’s studio as a kid, and missioning off and hanging out with friends of my mom who were artists, filmmakers and designers who worked in the building, when I was with my dad I would hang out with Sibot, who we used to live with. At the time Sibot & Ninja inspired me to want to sew toys, because even though they were musicians they were really skilled toy makers. Later on this turned into animation and music. Then later on when I started traveling I was heavily inspired by the energy and creative scenes in other countries. I want to be on the pulse of indie creative youth culture. This is the thing that inspires me most.

EL: At 17, you’re the youngest person we’re profiling in this issue, which is devoted to the new generation/uprising in art, but in a lot of ways — you’re also one of the most accomplished & prolific creators in the bunch. Was your output building from a young age, & were you always so active, if not always on display publicly?

JF: I have always drawn a lot but in the past 3 years have started painting walls, and putting my focus into my [various] projects. At the moment I’m working on a comic book, a music video, and an indie web series. For the two video projects I’m making the music and doing some animation for parts in them. 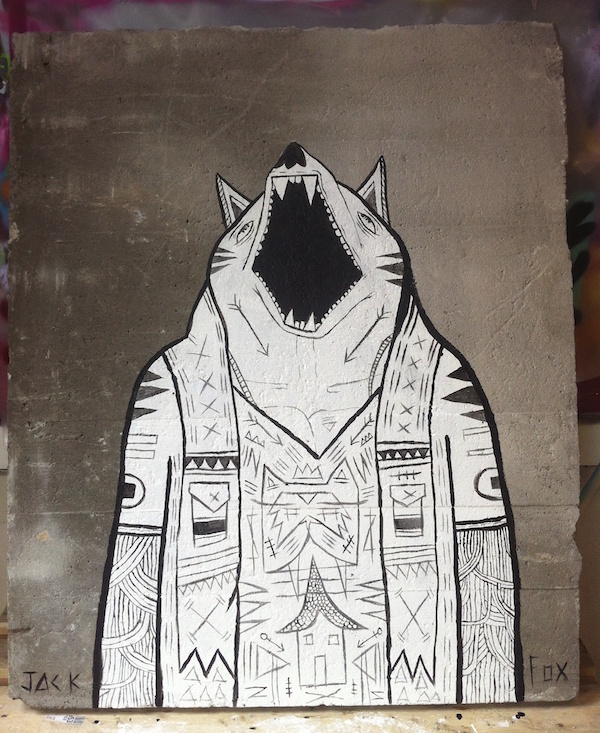 EL: Your mother’s mural work is highly regarded, as is your father’s tattoo work. In a way, your own ideas seem to carry something from early tattoo iconography into the world of street art. Was this something you were conscious of, your influences at home & in your upbringing, & how your work may appear to be the offspring of multiple worlds/disciplines?

JF: I find tattoos very exiting. I think that I drew some inspiration from tattoos, especially in my darker work. I liked the idea that you get skulls as tattoos not as a sign of rebellion but rather as a reminder of death, as a way to appreciate and to be fully in the present moment. In that way this message translated to me, as a way to use to use the collective symbols of darkness to give appreciation to happiness and the playful nature of life. My mom inspired me by the way she observed the world and expressed herself through her work. She inspired me to internalize ideas about the world and express them through work.

EL: We’re aware that you’re also something of a musician/producer. What kind of music informs your work on the street? Does the natural relationship of these two worlds (graffiti & music so often go hand in hand in New York & elsewhere) allow you to travel back & forth between modes of expression?

JF: Even before I started making music I would always try find new alternative music. I really like the South African music scene, from kwaito to rap to indie to township tech to alternative electronic independent artists. Types of music that inspire me that are not South African are trap, witch house, electronic indie and independent rap. Bands I find inspiring that closely link with my work are The Moldy Peaches, Adam Green, Kimya Dawson, Edward Sharp, Crystal Castles, Husbands, and The White Stripes. I use music as an artistic output when i have exhausted myself creatively with drawing. Music brings my work alive for me more then animation. My goal is to combine the three and make an animated series and its music.

EL: Your work embodies narrative qualities, & utilizes text in a way that is familiar, direct, & comforting. It always appears to resemble, in some form, a perhaps coded message scrawled on a wall in passing by some traveler. Is there a kind of secret fiction to all of this, & does narrative work (books, stories, movies) come into play when you conceive your pieces?

JF: When I start a drawing I try to capture the feeling that is closest to me at that time and hold on to it while I draw. Then when I’m finished I find meaning in it that I drew on a sub conscious level. In my work I try to reflect personal stories messages and feelings. The characters I draw represent friends, feelings and at times symbolism for ideas about life. At the moment I’m working on a comic book that is bringing together a lot of these characters and ideas.

EL: The influence of illustration: Which cartoons inspired you as a kid? Any particular illustrators or animators you like?

JF: Some cartoons that inspired me as a kid were, films by Studio Ghibili, Samurai Jack, Venture Brothers and Invader Zim. Studio Ghibili especially, it made me feel that my world of imagination wasn’t a way to escape but rather a way to share connect self reflect and inspire. The journey that these shows sent me on internally still hold today. I feel deeply inspired by shows with individual personal and 3 dimensional relationships. I want to have the affect on others that theses types of shows had on me.

EL: So, if Jack Fox is the main character, this is essentially his story? He's as much a creation as any of your subjects? Jack Fox is an iconic name, but also a name that becomes part of your own unique iconography. What kind of story is it all forming?

JF: The story I’m creating is using Jack Fox as a representative of myself. Jack Fox is a fox but he’s also a man. There are a few different Jack Foxes. But in my new comic I’m connecting the relationships between these characters. My vision is for the characters I create to reflect my life. I try not to overly define my characters allowing space for them to live and grow in my sub conscious.

EL: If any, did the youth culture in any specific places standout from what you're used to in South Africa or from any of the other places you've visited/lived? You've spoken about China before, but where do you find the most restless, impassioned young people?

JF: I am deeply inspired by the South African underground electronic scene, from alternative hip hop inspired beats to Kwaito and more experimental stuff. I feel that the youth in this scene are less angry and more inspired and reflect the best of creative sub culture. On the other side of the spectrum I’m inspired by grimy, electric, darker sounds that seem to come in their purest form from England. I haven’t even actually experienced this first hand, but it has had a tremendous affect on me. An example is Witch House. It really inspires me with its dark bass and punk, somehow trap sound. In Australia, the US and most of the world, there are extreme movements, & the sub cultures around this are highly inspiring. I want to be pushing on the sounds that come next. On an artistic level I feel the urge to travel and be around the new because this gives room for so much possibility.

EL: You're hard at work on your comic, & the series you're working on. Is there anything you can tell us? Is the series animated? Would you ever consider branching into directing live actors, that kind of filmmaking, or have you already?

JF: The comic I’m working on is about Jack Fox as a young man, traveling the world and exploring the infinite collective consciousness. It’s connecting many ideas I have been working on. I am working on a series with a friend at the moment. I’m directing it, making the sound track, and animating small things onto it — but it is mainly live-action.