Clear skies and a 360-degree view of New York City from the East Village. Okay, I’ll take it. Throw in some inspiring conversation with established filmmaker Lisa Gunning and you’ve got yourself a pretty solid evening.

Lisa’s work spans across the world of filmmaking, from editing movies (Seven Psychopaths, Nowhere Boy, Salmon Fishing in the Yemen) and commercials (Nike, Land Rover) to directing a 30 min music video-short film hybrid (let's call it a music film for all intents and purposes) for the band Goldfrapp. The film consists of 5 short films, each based around a song from the album Tales of Us and is followed by a live performance streamed directly to 300 cinemas around the world from Air Studios in London in March of this year. Lisa worked closely with Alison Goldfrapp, singer/songwriter on the project and also happens to be her partner in life. Lisa’s success is a no-brainer.

It immediately became apparent to me that Lisa’s work is full of heart. While we were discussing her style of editing she emphasized the importance of the subject matter. Why are you making this? What message does this send? Using your art to reach out and touch someone’s life is the ultimate priority. It was quite refreshing.

On top of this incredible quality of hers, she also proved to be one of the most modest people I’ve ever worked with. While shooting a few photos of her on the top floor of the Standard Hotel, the potential to feel a bit “bougie” was in the air. However, the entire experience felt as humble and as “fly by the seat of your pants” as the shoots I did in college. Lisa was a part of the team—helping move furniture around just to get the right shot. She was like a kid in a candy store peering through the viewfinder of the Hasselblad film camera. Standing on wobbly stools, crouching in a bathtub and climbing on top of a giant ottoman. At this point Lisa asked, “Is there where I take my top off?” 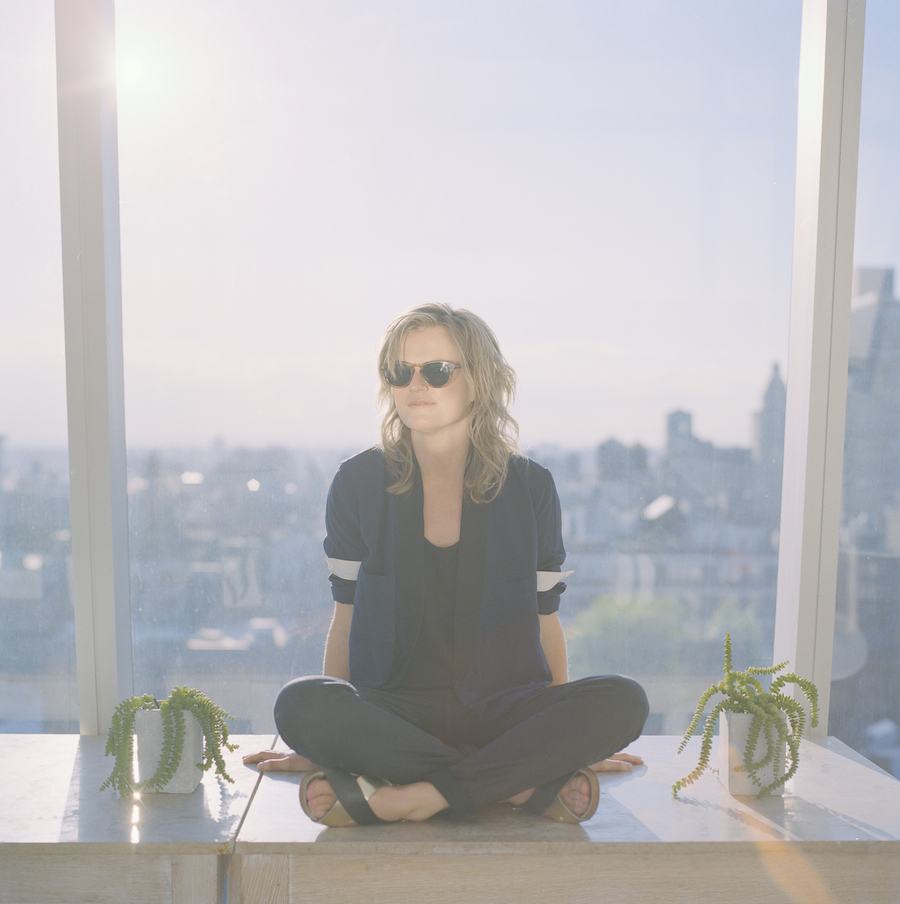 Caroline Aylward: I saw Tales of Us at the Davis Theater in Chicago when it premiered on March 1st. Embarrassingly, I had no idea the performance part was live streamed to the cinema. Didn’t hit me until it was almost over, which is a testament to its success.

Lisa Gunning: I am so glad you liked it! That really means a lot. That night was really nerve-wracking for us. The live show part was a super ambitious undertaking for the budget we had and we were right on the edge of what was possible and impossible! All the run-throughs we had were disastrous but miraculously it all came together during the actual live transmission!

CA: What did you shoot the films on?

LG: A mixture of Alexa, Red Epic, Cannon 7D and Go pro. It was wonderful to experiment with all these different cameras. We used the Alexa and Red Epic for the more glossy, cinematic shots in Jo, Stranger, Drew and Annabel.  For Laurel I wanted to use the Cannon 7D for more intimacy. I liked that we could be more spontaneous and free with our tiny crew.  We even strapped the Go pro to Alyssa, our wonderful pole dancer, to give us a POV we could never have achieved with a bigger camera.

CA: That makes perfect sense. The songs are so cinematic.

LG: Yes, well the song is king. Alison sent me some demos to listen to while I was away cutting Seven Psychopaths. I started developing these ideas in my head and wrote them down as a script. I shared it with Alison, Will Gregory (her musical partner and the record company, Mute). They loved it so we just went for it. We always wanted to make a video together so it made sense.

CA: Cap Gun Collective, the production company you worked with on “Tales of Us,” is the sister company to Whitehouse Post—who you cut commercials with. How was it working with Cap Gun?

LG: Ollie from Cap Gun was super supportive...he really believed in what we were trying to do and together with uber Producer Steph Zari, encouraged me to elevate the scale and quality of the films. I'm very grateful to them for that. Steph managed to do the money equivalent of turning water into wine!

LG: Yes. I think it's difficult to execute a story with a beginning, middle and end. It shows respect for the audience and requires hard work, discipline and craft. I really enjoy seeing a film that has been really thought about, that has a certain tension in it and that delivers something visceral and emotional.

CA: Are there any other collaborations with Goldfrapp on the horizon?

LG: I hope so. They are true artists and it's a real pleasure to collaborate with people who care so much about what they do.

CA: You got an incredible reaction from the fans for the Annabel film. I know you mentioned getting some emails from people who were really touched.

LG: I was so bowled over by some of the responses. People seemed to really connect with the story, gay and straight, male and female.  We got some especially moving messages from people in the transgender community who thought that the film really summed up what it was like to be in their shoes. I’m thrilled about this because I was worried we were stepping into dangerous territory. I’m not transgender but I do know what it’s like to want to be accepted for the person you really are, so I just channeled that feeling while I was writing and directing it. I guess that was the right thing to do!

CA: The song Annabel is based on the novel by Kathleen Winter, which you have purchased the film rights to. Is something that will happen in the future?

LG: I really hope so. We’re in the development stage at the moment and I feel very passionate about transforming this beautiful book about a girl trapped inside the body of a boy into a movie. It deals with the universal need we all have to be accepted for who we are. I can’t think of a more important subject to make a film about.


As a filmmaker myself, it was incredible to delve into the mind of an artist who strives to make great work, while at the same time being so dedicated to story. I find myself sticking out like a sore thumb because of how heavy my heart is for story. How does it get so lost in the process? Story is where it all begins, right?

Lisa has managed to successfully edit and direct. It is becoming more and more important to understand all aspects of filmmaking as the entire process is being compartmentalized—shooting and editing on iPhones. Being a jack-of-all-trades is the future of content creation. It is inspiring to see a filmmaker wearing multiple hats while maintaing what is most important to them—story.


CA: You are constantly traveling for work. Where is your favorite place to make a film?

LG: My favorite place is wherever the story is! I'm just as happy to film in a crazy, freezing cold camping site in Camber as I am by a mate's pool in the Hollywood Hills.  As long as there's a story I want to tell I'm happy filming anywhere!

CA: What brings you to New York this time around?

LG: I have been working on some quirky commercials with Whitehouse for the Sprint Framily Plan campaign. They’ve been fun. It’s a great way to travel and doing them gives me the freedom to direct my own projects when I get back home.

CA: Traveling all over the world, it must be nice to return home in Shoreditch, London. I absolutely love that place.

LG: It’s an amazing place isn’t it? I have lived in my house for about 10 years.  Shoreditch wasn’t nearly as developed when I bought it.  But I saw something in this house and immediately knew I had to live there. I scrounged together enough money to buy it and over time Alison and I have made it a home together. It was in pretty bad shape at first. It used to be owned by gangsters, actually. There was a knock at my door one day and there was a big group of people standing there holding flowers. Apparently someone had died who used to live there and they wanted to pay their respects.

CA: Did you let them in?

LG: Yes! I let them roam around the house freely, which I think they appreciated. Over the years I’ve never had any trouble so I think they’re looking after me somehow!

CA: Wow, nothing like having a few neighborly gangsters on your side.
So how did you get started in the world of editing?

LG: I studied English literature at University so I’ve always been quite obsessed with storytelling. I also have a passion for music and all things visual. When I was a kid my mum caught me trying to get inside the TV because I thought it looked better in there! When I got older I had to weigh the pros and cons and decide what the best way for me to be creative was. I literally wrote down all the options and landed on “editor”. Then I just went for it. I started out assisting and getting my hands on any work that I could. In the late 90’s I stalked Rick Lawley around Soho, London.  He was editing all the great Guinness/Nike commercials at the time and I insisted that he hire me even though I’d been rejected 3 times by his company, the Whitehouse. Luckily he wasn’t too freaked out by the stalking tactics and he finally gave me a job as his assistant. A year later I had my own cutting room and in walked Anthony Minghella (English Patient, Talented Mr Ripley, Cold Mountain).  Anthony became my mentor and gave me my big break in the movie business.  I consider myself extremely blessed to have learned so much from him.

CA: Once its time to start cutting, what is your first step? I know some editors feel differently about being on set. Is this something you find necessary for your process?

LG: If I'm editing a movie I try and stay away from the set. Seeing material for the first time is very precious. It is the only time you can truly feel what it's like to be the audience. It's like being a virgin before the sex. I think it's important to respond to the material in a virginal way and being on set can ruin that opportunity! If I’m the editor I shouldn't really know how hard it was to get the shot. I should only be concerned with how well the shot works. Once I've been on set, it's impossible to divorce myself from that experience. Now, if I’m directing I need to trust an editor to do that for me!

Lisa’s work demonstrates much more than an incredible eye for the rhythm of a film. Her passion for story shines through in her next project, a short film called “The Interrogation” about a 14 year old boy named Paul who was wrongly accused of a murder in the late ‘80s. Intense and brutal questioning prompt him to make a false confession and lead him to wrongful imprisonment for 24 years. The social message and justice for Paul are things Lisa feels strongly about. Her goal is to continue making films that convey a message and to make a difference in peoples lives. But for now, she is back in London to support Goldfrapp at Glastonbury.

The 30min film Tales of Us is now available for download on iTunes.