It's always nice to meet someone who speaks highly of their friends. Michael Alan strikes me immediately as a very thankful guy. His work is a reflection of his surroundings: a veritable melting pot of splendor & decomposition, personalized by a fierce grip on adolescence, excitement, & premeditated chance. This month, for one night only, Michael will lead a group of performers & models in a live installation at The House of Collection. In the invitation, he promised to "create illusions of the flesh, triple legged ladies…arms over arms, breasts over breasts, parts being used in ways unheard…This happening will be 7 hours." I met Michael at his studio in the outer boroughs, on a day he was recovering from a recent surgery. He was in pain but remarkably docile, & spoke of his plans to continue drawing late into the night. 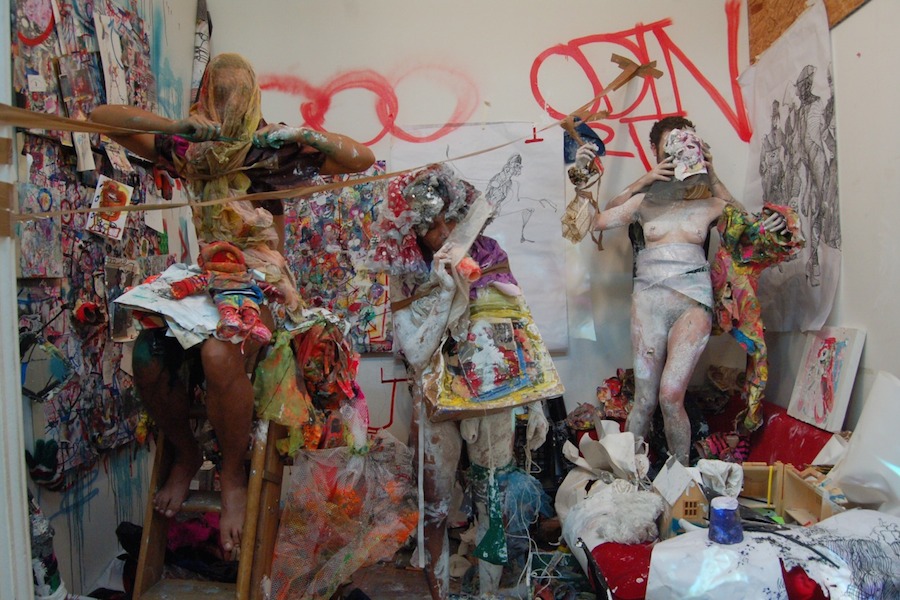 He mentioned a bit of his past, both the highs & the lows, the tragedies he witnessed, the inspirations to overcome, all of it off the record and not in detail, true New York style. Just enough to let you know who you're talking to. The work was organized and flowing throughout neatly stacked books & comics & action figures. Up close his chaotic sculptures seem to freeze a moment in time & embody the act of brazen instinctive exploration under circumstance of viewed performance. As I try recall them in my mind the images are not static. They are rushing and moving, still.

Tom Koehler: Where you from?

Michael Alan: I'm from New York, but, let's make it interesting... I was staying here from the bottom to the top...Born & raised in New York City, all parts. Especially parts that they don't consider New York.

T: What's that? What don't they consider New York?

T: Is that like people have some sort of territorial thing or just the idea that New York is only Manhattan?

M: I think that most people, from personal experience, they frown upon Staten Island, or the Bronx, the Outer Boroughs, which is kind of crazy because it's the people who serve you... Literally, those are the working people, that is the working class, it's not wacky, I mean, not everything is Bedford Ave, not everything is Chelsea. It's a big fucking place. There's a lot of stuff. You gotta consider the whole New York when you consider New York. You can't consider London & only focus on two streets. You gotta consider the whole London. I always found that weird about New York. Maybe that was the beginning downfall, you know? We only see New York as this. There's a huge New York out there.

T: Where did you retreat to as a youth?

M: My drawing. Literally. Hiding in my drawing… Art saves lives. So for me, New York, everyone always says they're really sad New York changed, & I feel the same way, but at the same time, it's good that there's less people getting shot in the face, you know? So, you kind of have to retreat, it's depressing, you know? I mean, cops didn't really care, now they care about weed, or you taking a piss. When I grew up, they did not care. I had a friend who got thrown off the buildings of the projects, they didn't even investigate. He was thrown into a garbage can. They probably wouldn't care still, they're more interested in tickets, & money. So I always had to retreat into drawings. I couldn't handle it. It's like a war. Cops don't care. Unless some rich person's house gets broken into. And I'm not trying to hate, it's just me saying what I saw.

T: How old were you when you started making art?

M: That's something I always did. That's something, it's my earliest childhood memories. I remember, I actually remember the hospital, these green halls, being strolled through like Jacob's Ladder (1990 classic, dir. Adrian Lyne). And I remember laying down in my kitchen, making my own baseball team. And my mom was like, "That's a good idea, let's make a book!" 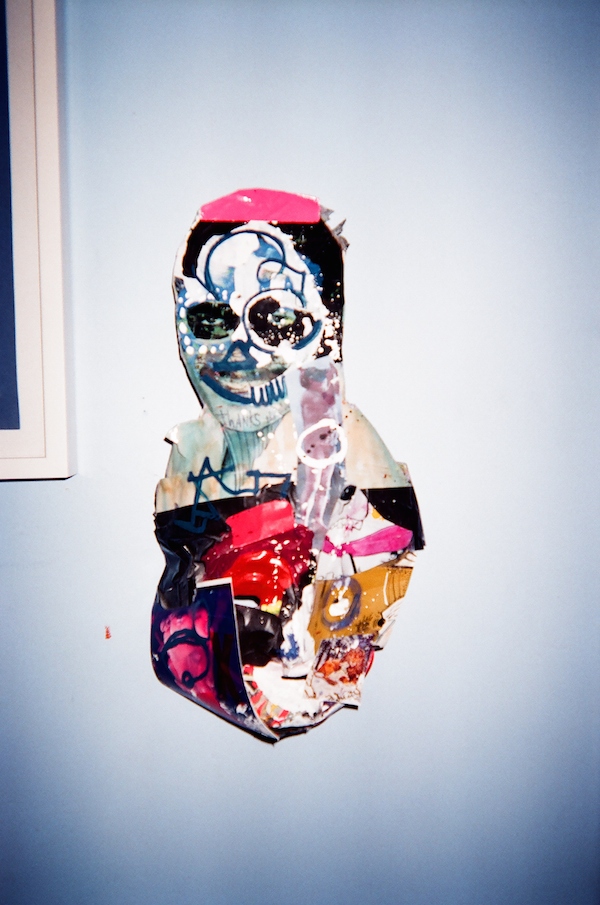 T: Why do people make masks?

M: People make masks with their emotions, that's for sure. They make masks with their overall life, maybe because it's easier, but I think it's easier to be honest. I think masks are made all the time, so it's really good to let it all hang out. But physical masks are beautiful & it's a good way to make a sculpture, & it's a good way to embrace our history too, you know like tribal art, African art, that first section in the Met, those things are so beautiful man. I'm not an art historian, but you can understand that there's a whole meaning behind all that, behind that intention. I make my masks because, well A) I wanted to make my work 3D, & B) I never wanted to hire an assistant, I don't want anyone to make my art but me, & C) I use my masks in my performances, to cover the performers' faces, because they're nude, & I don't want to ruin anybody's life. You know, like all of a sudden in 5 years they have a kid & they're like "Oh, fuck." I don't know if you can print curses in this.

T: I think we'll be alright. I'm down with it. What's your favorite part of nature?

M: When you can stop yourself & really slow down time & focus on the little parts & see the act of creation, because it is super creative, & then you can imply & embrace it, you can respect it, you can take yourself out of your ego, & be like, "Wow, Jesus, this is better than painting." 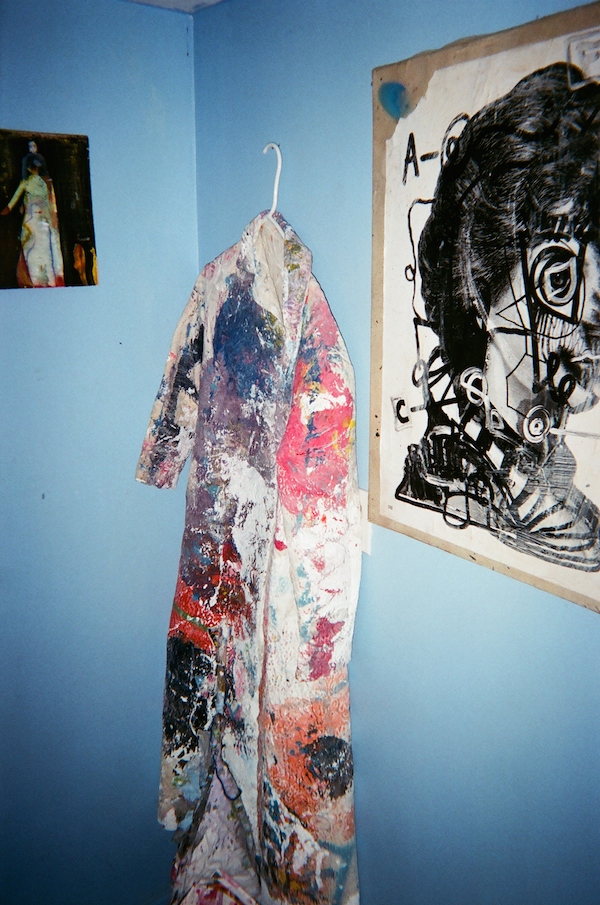 M: I think it's honesty. I hate to say the same thing twice, but when the lines are intentional, & the marks are intentional, & that work can be broken down into subcategories, but when you really think about it & you feel it & you also improvise & give it a mixed bag, I think the best form of art is still when it comes from a person, itself, it doesn't involve multiple hands, like a Jeff Koons thing, that's like the worst form of art. I'm not even trying to diss him, but me, I want to see the artists' hands, I want to see the marks, you know, like the work I own, it's made by people, I want to see that. It's like you grabbing energy or that person making energy, it's not like their assistant is grabbing the energy.

T: What do you believe in?

M: I believe in hope. I believe in fun. I believe there are good people out there. And don't let yourself get scrooged up. Don't believe the worst. I believe fear is put in us, to protect us, but at the same time we have to fight it. And I definitely believe that we don't know anything.

T: If I ask you to picture 5 symbols, what are they?

M: Circle. Cause everything is. Triangle, peace sign, a dolphin, & a heart.

T: What musicians inspire you?

M: Oh boy. Too many. I lose track of who I --- I'm a collector. I believe in Other Music. This is not a plug, I don't work there, but man, I just learned so much from that place. I learned a lot. I like Throbbing Gristle, William Basinski, Phillip Miller, the composer for William Kentridge. MadLib. DRI (Dirty Rotten Imbeciles). Void.

T: What about artistic influences?

T: When will you stop making art?

M: I can't stop making art. I wouldn't have another life. Art saves lives. It truly does.

The Living Installation is a unique community project that has manifested itself for 11 years, transforming a wide variety of spaces such as the New Museum and Chelsea Art museum, Kenny Scharf’s cosmic cavern, the Whitney Museum, Gasser Grunert Gallery, Teatro Iatti , ABC No Rio and the Dumbo Arts Fesival.