The first time I saw Nissim Ben Aderet’s work, I was at an art fair. I rarely go to art fairs but I went because Ari, my baby, who was three months old at the time, had never been to an art show before and I thought it would be good for him to see, well, art. I figured an art fair was a safer bet than a museum or a gallery because if he started screaming, I wouldn’t really give a shit. I’ve never been a big fan of art fairs (or babies, to be honest) and I’d be significantly less mortified here than, say, at MoMa.

Ari didn’t flip out but neither did he seem particularly impressed. In fact, he spent most of the time just hanging out and drooling in his Baby Bjorn until suddenly, he turned his head with such force that I actually had to turn and look to see what he was so fascinated by.

Lo and behold.
It was Nissim.

Well, it wasn’t actually Nissim himself, it was one his paintings. What had so captivated my little monkey had, in fact, turned out to be a series of paintings—all black and white line drawings. I took one look at them and immediately understood exactly why Ari was so transfixed. Nissim’s work was, like, the most amazing baby art. I mean, it was like Baby Einstein’s wet dream.

Wildly successful as Baby Einstein is, I understand that no artist really wants to be considered “baby art,” but when you have a new baby, it’s pretty much all you think about. What is that Simone de Beauvoir quote, “We see the world not as it is, but as we are?” So, yeah, that.

Then, a few things happened. I became immensely pleased with myself that I had birthed an art lover. Especially since the more I looked at Nissim’s work, the more impressed I became with Ari’s taste. . . 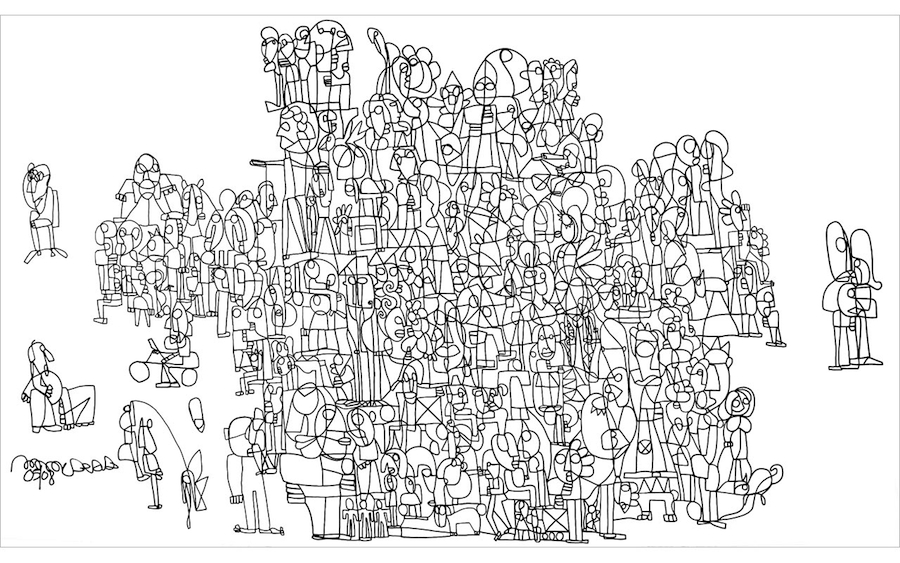 Nissim’s paintings are insane. They are reminiscent of Picasso, during his cubist period, if Picasso only painted in black and white and then went totally ape shit with a sharpie. That’s my take, anyway. More formally, his work has been explained as follows “. . . a painting that is created when rationality cannot contain emotion. . .to create an image that is free from the constraints of logic. . .a process of creation and study of the line, the story, the image, and the personal expression that grows sharper and more powerful over time.” I’m not entirely comfortable with formalities though, and so, in layman’s terms, Nissim’s work is comprised of one line that turns into an entire story. And the longer you look at it, the more crazy shit you see. Or, that’s what it looked like anyway. But then, what did I know? I was still in pain from my C-Section and, as such, on like fourteen Percocet. Everything looks good when you’re on Percocet.

I decided to stick around to get to the bottom of this. It’s not that often you discover an artist who blows your mind. Let alone at an art fair.

As luck would have it, it just so happened that Nissim was actually on site and about to start painting. Watching Nissim draw is like joining a cult. You can’t help but become totally transfixed. It goes something like this: The first thing you see is a huge white canvas. The next thing you see is someone who looks like a sexier version of Ben Kingsley playing Ghandi walk up to the dead center of the huge white canvas. And then he takes out a thick paint pen looking thing. And just as his paint pen hit the canvas, I became as mesmerized as the baby. He starts by making this sort of dot in the middle of the canvas and then he makes what looks like a line but actually turns into a person and that turns into a dog and that turns into a balloon and that turns into another person and that turns into another person and then another and before you know it, an hour has passed and there is an entire narrative that has just taken place in front of your very eyes. And one quarter of the huge canvas is covered.

At which point I started to walk away to get a sandwich. One of the things I like about art fairs is that there are always little restaurants there. Before I discovered Nissim, I had been looking forward to eating a sandwich at this particular restaurant. I was going to leave and then come back so I could introduce myself.

But as I started to walk away, the baby, who had, up until now, not made a peep, began to wail inconsolably. So I walked back and as though hypnotized, as soon as we got back in front of Nissim’s work, he was silent.

Two hours later, the entire canvas was covered and I was trying to convince Nissim to move with me and turn the baby’s room into his art studio.

Nissim turned me down. So instead I bought a painting for Ari. His first piece of art. It’s amazing. He loves it. I love it. My husband loves it. Moreover, I’ve been following Nissim’s career and I’m pretty sure my three month old made a great first investment.