NONONO is a Swedish pop trio consisting of renowned production duo Astma & Rocwell (Tobias "Astma" Jimson & Michel Rocwell) and singer/songwriter Stina Wappling. Hailing from Stockholm, for the past decade Astma & Rocwell have worked behind the scenes with many big names, mainly within the hip-hop realm. Upon being introduced to Stina in 2012, the duo decided to make the transition from producers to artists. Combine Stina's stunning cool vocals with Tobias and Michel's electronic bassy poppy beats, and we have a catchy sound that half resembles the likes of their fellow Swedes - Robyn, Icona Pop & Peter Bjorn and John. 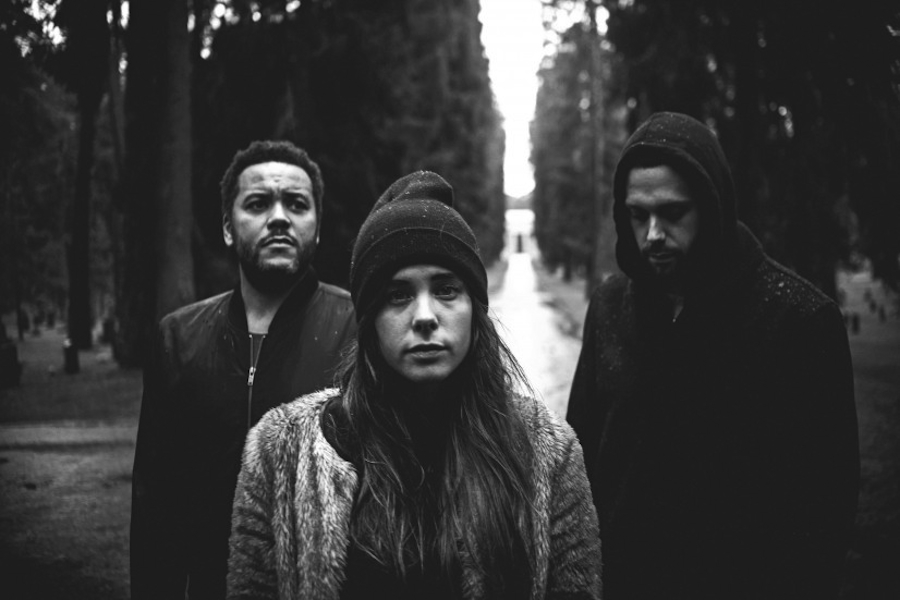 Their debut EP Pumpin' Blood was released in the US last September and has already had over 3 million hits on youtube and was the most played song on Swedish national radio in 2013:

Having rounded off 2013 with some US tour dates playing alongside the likes of the Arctic Monkeys, Bastille, Foals, Chvrches and Portugal. With The Man, All Saints Acoustic Sessions and various other gigs stateside, and their first album due for release next month in Scandinavia with a later date for the US, NONONO is gonna be BIG.

I caught up with the guys for a little Q&A while they were on the road stateside….

Georgie: Tobias and Michel, I know you guys come from a production background when did you decide to make the transition over to become the actual artists and form NONONO with Stina?

Tobias/Michel: I guess we were tired of being stuck in music-projects that we weren’t fully into and we wanted to do something where we had total creative freedom. It started out more like a producer’s album but it grew into NONONO when we met Stina and realized that it would be much easier and more fun to start a band together.

GM: Stina I know you worked in psychology. Has that been hard to leave behind to focus on your singing?

Stina: It’s been a little sad leaving the clinic where I worked, but I think everything you do and like has it’s time and place. Right now it’s music but I’m sure I’ll go back to the psychology (therapist path) at one point.

GM: I feel it's super exciting times for you all right now as you are garnering quite a fan base worldwide since the release of Pumpin Blood in the Autumn, and with your hotly anticipated album due for release shortly. Can you give us any idea when that is due for release?

NONONO: We aim for a Scandinavian release on the 24th of February and a late Spring release for the US.

GM: How would you describe your sound and what can we expect from your up and coming album? Do you have particular influences individually or as a collective?

NONONO: Our sound comes from all the stuff that we like, Tobias is really into early 90s hip hop, Stina likes singer songwriter stuff and Michel is a big fan of New Wave UK bands around the 80’s. It’s a mixture of organic and yet programmed and controlled.

GM: I know you guys are currently touring stateside - having just done a stunning acoustic session for All Saints Acoustic Sessions in LA - super cool and ...tell me how has this experience been?

NONONO: We are really new to the live situation but we are slowly starting to like and feel more comfortable about it.  We love touring in the US. People here really show us how much they appreciate us and our music at the shows.

GM: Do you have any further tour dates / festivals planned for next year?

NONONO: We are doing South By South West and summer festivals in the States and are planning more dates for Spring.

GM: How did you come up with the name for the band?

Stina: The name might sound negative but for us it’s positive since saying no to things that you don’t like or relationships that you don’t want to be in leaves space for other things. That’s how we came up with it. Tobias and Michel were stuck in projects they weren’t fully into and started saying no in order to do music that they really wanted to do.

GM: Tobias and Michel are you still producing or now solely focusing on the band? Are there any particular artists you all would like to collaborate with in the future?

Tobias: NONONO has kept us quite busy so we haven’t really had the time to do other production other than stuff that we started before the band and really wanted to finish.  Michel is a huge Depeche Mode fan so that’s something that we really would like to do. It would also be nice to do some more hip hop work since that’s where we come from.

GM: Sweden has been producing some serious talent over the years - are there any other exciting up and coming artists we should be keeping an eye out for?

GM: Thanks again for taking the time to chat with me and I for one am super excited for you guys and what 2014 has installed for NONONO.