Motel Rooms, Strip Clubs, Pow-Wows, Dive Bars. The sordid glamour of a bygone era and the enduring beauty of the American Road are documented and recreated by Tafv Sampson and Nicholas Des Jardins in their photographic collaborations.

Rémy Bennett: What’s your artistic process in terms of collaborating together?

Tafv Sampson: With our recent photo series, I’ve been shooting and he’s being helping to design things conceptually. He looks at the bigger picture and sees how the final product can be executed.

Nicholas Des Jardins: It’s always a conversation. We have similar ideas, but sometimes I lean in one direction and she leans in another. 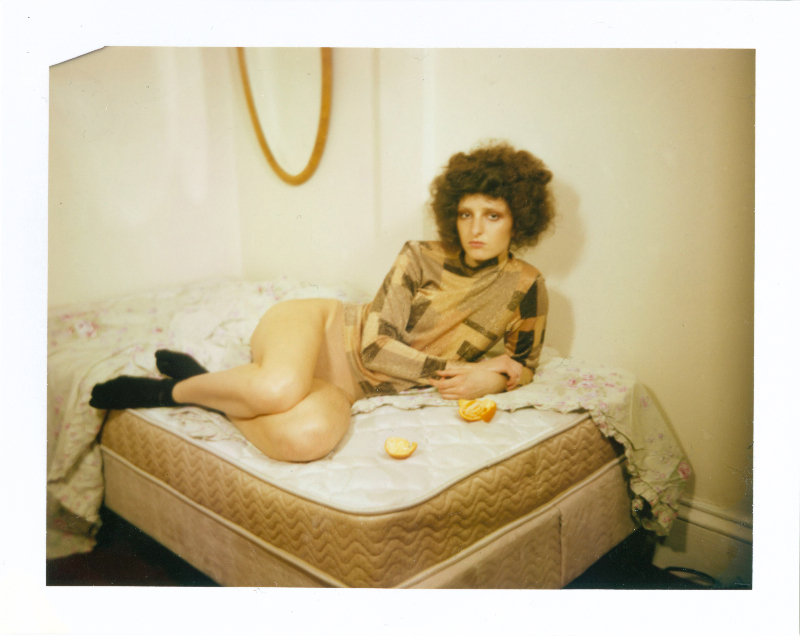 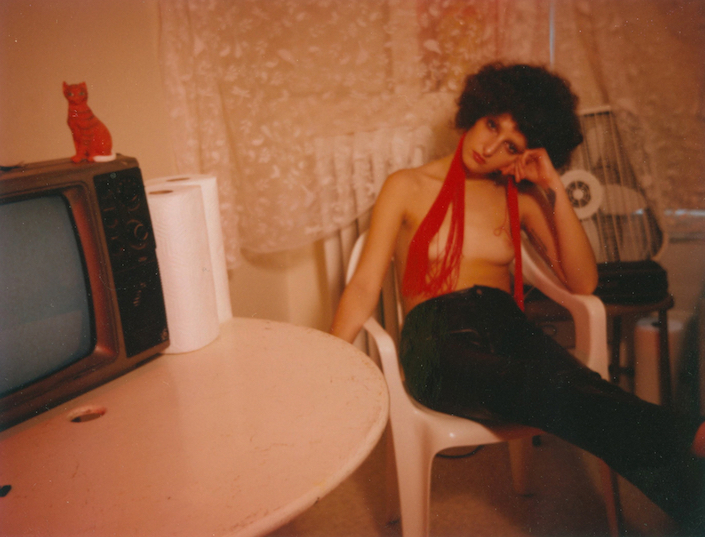 R: For the series Girls In My House you built backdrops in your house and created a set for the girls to model within. You created a 1970s tinged boudoir feel with the set design that has a real authenticity, shot on film with a Polaroid 180 camera, while simultaneously filming the girls on an old Panasonic to eventually produce VHS. Also the series you’ve done set in motels has a similar style and texture. Was this particular time period and aesthetic a stylistic sensibility that appealed to both of you?

N: But with this particular series I think it all started with Chicken Ranch.

T: Oh yeah we watched this amazing documentary made in 1983 called Chicken Ranch [dir. Nick Broomfield & Sandy Sissel] about a brothel in Nevada. The color of the film is just so incredible, and there’s this great Thanksgiving dinner scene that we fell in love with. All the girls sitting around the table with their big hair and dresses…candlesticks on the table and the Madame and the Owner at the heads. When we watched it I was like “Nick..we have to recreate this somehow." We wanted to rent a motel room, or build a set, and have an actual Thanksgiving dinner with our friends, art direct it , have everyone dress up, and shoot it. That was sort of the seed of where the Girls in My House series started, and that became the set that’s in our house. 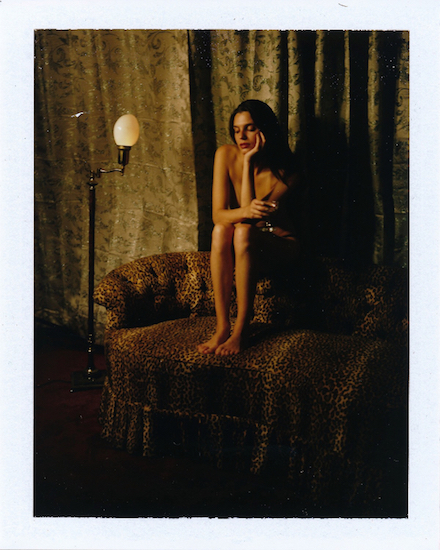 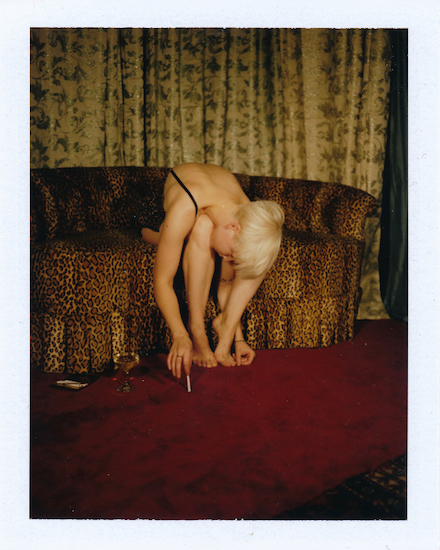 R:  So when you’re living with a partner that you collaborate with creatively, how much does your home also become a creative space?

N: (laughter) Right, [like] how long does your living room remain a set?

T: And I can’t imagine going back now! Our roommate recently moved out and her room has now become a sort of prop and set room for us that we can pull from.

N: Yeah, and it’s motivational too. Living with another creative person who can inspire you on a daily basis. Thinking back to art school… what you actually learn in classes is nothing compared to what you learn from being around other creative people. It makes you want to create more.

R: You’ve also been creating various photo series on the road documenting your trips around America.

T: I’ve been shooting on my 35, and Nick has been working on a photo book on American strip clubs. We started posting things along the way and got sort of a following which was good fuel to continue documenting the journey. Every time that we stopped in on our road trip, even if it was in the middle of nowhere, our goal was to find the local strip club. We ended up going to one if not more in every town that we were in. He would shoot on the iPhone and I would use my 35. I fell in love with Nevada in particular. There’s a whole other project that i wanna start working on soon based on this motel that we stayed at in Nevada, in Reno.

R: What was the original impetus for the trip?

T: There was a pow-wow in Montana we wanted to go to.

N: It’s something we had talked about doing together even before we were a couple.

T: It was the same pow-pow in Montana that I always went to when I was younger. As a kid I was a traditional dancer…so I would drive there from LA & stay there for a few nights with my family. I hadn’t been back since I was 7, so Nick and I really wanted to go there.

R: So the destination spurred your creatives endeavors on the road?

T: We found the perfect van, that was so photogenic, and Nick built it out.

N: I built cabinets in the van…drawers and dressers on top of the bed and Tafv’s dad was gathering bits of scrap wood to paint on.

T: That was when Nick met my dad for the first time. He watched Nick build out the van and was very impressed. My dad’s the most creative guy. My mom’s very smart, and an amazing writer, but she doesn’t have that same gene. My dad can take anything and make it beautiful. Just give him a piece of wood and a pencil and he’ll make it beautiful.

R: Was traveling something you always did as a family growing up? I know your grandfather Will Sampson and your father have a history in the American rodeos.

T: Yeah my dad got me started real early in traditional dancing. I started when I was four. Him and my Aunts would hand make all of my costumes for me. They hand beaded my chokers and my dad would paint and make my moccasins and my dresses. He still makes me moccasins actually! My grandfather was a rodeo star in Oklahoma for a long time on the professional bull riding circuit. He did that until he was in his mid 40s, and then he got randomly cast in One Flew Over The Cuckoos Nest in the role of Chief. He became an actor after that cause he figured he was too old to ride bulls anyway at that point!

R: Besides portraying the most iconic American Indian characters in cinema I read that he was also a prolific painter. There seems to be a deeply ingrained spirit unique to the American experience that you bring to your work. Nick how do you think your background informs the work you guys do? That spontaneity of being on the road, and of discovery and travel...

N: My background is pretty different. I’m from a small island and I didn’t travel much at all when I was little. My dad travelled a lot before he moved to the island. He had hitchhiked across the U.S. three times and he was very much involved in the hippie movement and dropped out of college to tour with his folk band, so I grew up constantly hearing these stories. He ended up in St. Croix because he got an art residency there, and that’s where I eventually grew up. But for me I always heard those magical stories about traveling around America. I definitely started to glorify and romanticize these places in my mind.

R: And Tafv…your mother is a journalist and has continually worked on the road. Her first big assignment culminated in a book she wrote called Destination Gacy: A Cross Country Journey to Shake the Devil's Hand which documented her experience of visiting the serial killer John Wayne Gacy before he was executed on Death Row. Did your mother’s work have an influence on you and your eventual interests?

T: Without a doubt. My mom’s bread and butter has always been those little American towns. The murders, hookers, and drug dealers in all of if those places…those stories…that’s just totally her. And it was mostly just me and my mom growing up and I would go with her to work on these stories and I think I really adopted her sensibilities and the desire to know about people’s lives. My mom actually did this piece for the LA Weekly in the late 90s which was a cover story about her staying at this motel called the Sahara Inn. She lived there for a week and got to know twelve of the residents and hung out in their rooms and interviewed them. The project I want to do in Nevada is basically the photo series accompaniment to the piece that she wrote. 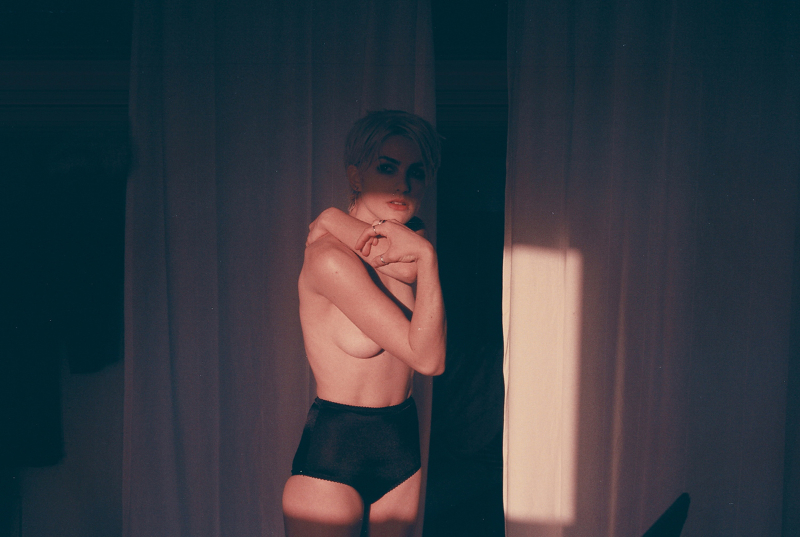 R: What do you have in store for your next trip?

T: We’d love to put out little books with the photos we take, and do more research for my residency series on people who live in Motels. My goal is to build a motel set in New York, and cast people to be the residents, and have my mom write stories to accompany them. But in terms of the route and itinerary of the next trip, we’re not really big planners, so we’ll see. If we decide to stay in a specific place we will, but if not we’ll just keep on driving.