Thief is the new electronic pop project of Australian PJ Wolf. Hailing from Sydney, Thief was born when PJ swapped his guitars for synthesizers creating an aesthetic that sounds similar to Metronomy, Frank Ocean and Miike Snow.

A winner of the renowned Australian Triple J Unearthed Top Song competition in 2008 and recipient of the Foundation for Young Australian Buzz Grant, this super talented young artist is making waves having also been shortlisted for this year’s prestigious Vanda and Young songwriting competition for his track ‘Closer’. 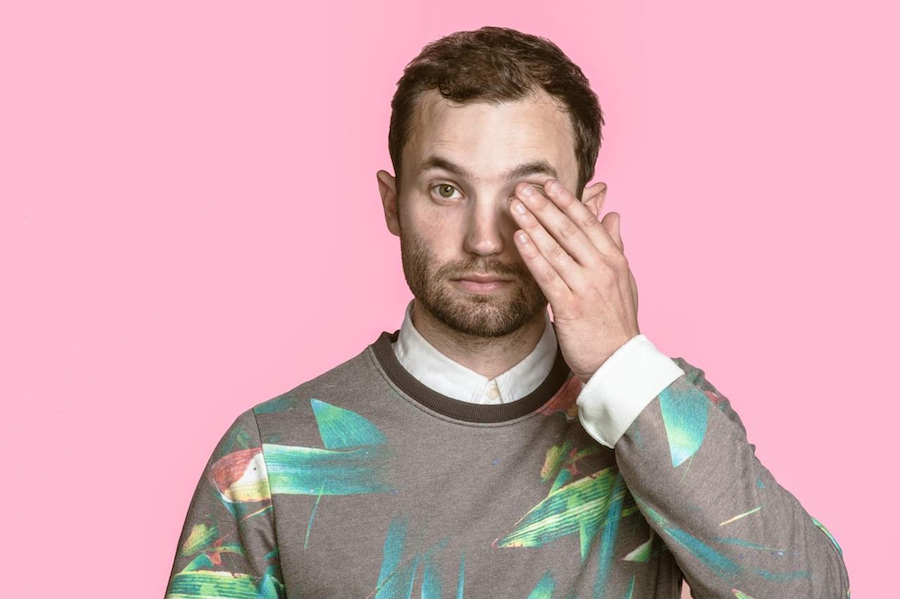 PJ teamed up with the legendary Brisbane-based producer Matt Redlich (of Emma Louise, Hungry Kids Of Hungary & Yes You acclaim) for the creation of his debut single ‘Broken Boy’ back in Sept 2013, and the EP ‘Closer’.  Having been heavily featured recently on music blogs worldwide as one to watch with ‘Closer’;  the track gets its official UK release on 25th March with the EP to follow in May.

Check out his music video for 'Closer' which was released in February:

I caught up with PJ last month as he hit the road supporting The Ashton Shuffle’s ‘Tear It Down’ Australian Tour, before heading Stateside where he has been selected to play SXSW this month.

GM: PJ firstly thanks for taking the time to chat as I know your tour with The Ashton Shuffles has kicked off. So where to start – I for one am super excited for you and Thief right now with ‘Closer’ being released in the UK toward the end of March – if people didn’t know of you before they certainly will now! Tell me a little about yourself – where you grew up and how you got into music in the first place.

PJ: I grew up in Sydney Australia. Most of my childhood memories revolve around beaches and holidays so I reckon I had it pretty good! My family was very musical, so I kind of just fell into it. My grandparents on my mother's side were both jazz musicians and my grandfather on dad's side was an Anglican minister so that side of the family all grew up singing and performing in church.

GM: Was music always a passion for you and if so who were your major influences growing up?

PJ: I had some piano lessons when I was around 7 or so but it wasn't until I inherited my Grandfather's drum kit about a year later that I really got obsessed with music. So, yes, it was certainly a passion from very early on... I mean there was definitely a time when Voltron and Ninja Turtles were my primary passion but I think the music thing happened quite early.

We listened to lots of different stuff growing up. A lot of big band jazz and folk music primarily. Mum and Dad used to play together and my Mum is a great songwriter herself so I'm sure some of my earliest influences come from them.

The first pop song I remember getting obsessed with was “Electric Blue” by the Australian band Icehouse. I just remember thinking how perfect it was, and I could listen to it over and over. I still kind of think it's perfect...

The first record I bought with my own money was Cooleyhighharmony by Boyz II Men. I'm not sure it holds up quite as well as the Icehouse record, but I listened to that record a hell of a lot. When I got a bit older artists like Jeff Buckley, Chris Whitley, Neil Finn and Radiohead were huge influences.

GM: How did PJ Wolf come about and what made you then swap your guitars for synthesizers and create Thief?

PJ: I’d been mostly just a drummer up until I was about 16 or 17. I guess it started when I finally decided to try singing some of the songs I'd been writing in front of people. The switch to using more synthesisers and programmed drums was really just a case of wanting to try something new. I think the music I’d been making as PJ Wolf was getting increasingly dark and esoteric and this was a chance to try something in the completely opposite direction. I did it for fun and I came up with a fun name for it (“Thief Urban” at the time). I shared a couple of demos online and they got such a great response and I had such a good time making the music that the side project quickly became the main project and now here I am! 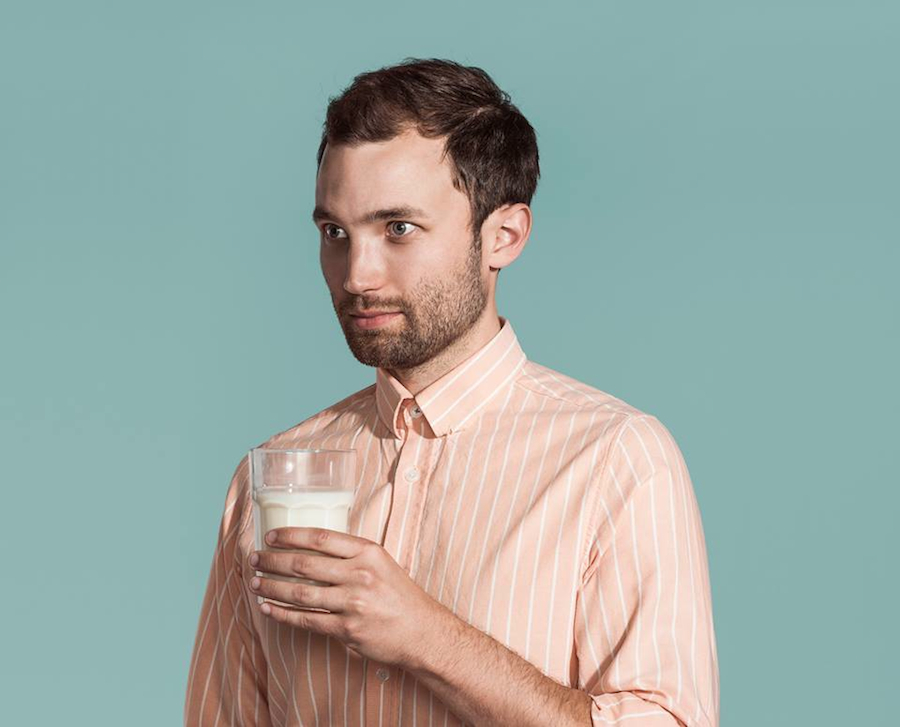 GM: It must be great working with Matt Redlich– how did that all come about?

PJ: Matt was an old friend of my now manager and we first worked together years ago on the PJ Wolf EP Arcadia Street which he mixed. Then we worked a bunch more times on PJ Wolf stuff and it was just one of those really great working relationships. So when the Thief stuff took off it was kind of a no brainer to work with Matt. He just makes everything sound better.

GM: 2014 has already started in a pretty spectacular manner for you, supporting The Ashton Shuffle on their ‘Tear It Down’ Australian Tour followed by the huge SXSW next month. Excited?

PJ: Definitely! It's going to be intense but great, and I'm really looking forward to getting out there and sharing these songs live with people!

GM: Any other exciting news, gigs and festivals lined up for you this year we should know about?

PJ: There will be lots of other exciting things happening in the year including my first headline tour of Australia and some brand new music releases but it's all yet to be officially announced.

GM: For me the internet and the likes of Soundcloud have been integral to discovering new talent – am I right in saying this has played a big part in your journey?

PJ: It's been huge! The Triple J Unearthed website is largely responsible for the project taking off really. They picked up the demos and played them nationally on terrestrial radio which kind of accelerated everything. Since then, Soundcloud has been super important in helping people share the tracks and it's by far the primary means by which people are listening to my music. It's pretty incredible really.

GM: If you had the chance to collaborate with any artists who would they be?

PJ: That's a tough one. I mean I'd love to do some writing for Beyonce or Rhianna or someone massive like that I guess, just to kind of see what it takes. But mostly I'd just like to work with other songwriters and performers I really respect. People like Neil Finn, Gotye, Prince, David Bowie... etc.

GM: Australia is renowned as a haven for electronic acts / DJs – who are the ones we should be keeping an eye out for at present?

PJ: There are so many! You should check out SAFIA, The Aston Shuffle, Elizabeth Rose, What So Not, Abbe May the list goes on!

GM: Thanks again and all I can say is wow what a talent and I am super stoked for you and can’t wait to watch you explode worldwide – 2014 is the year of the Thief! 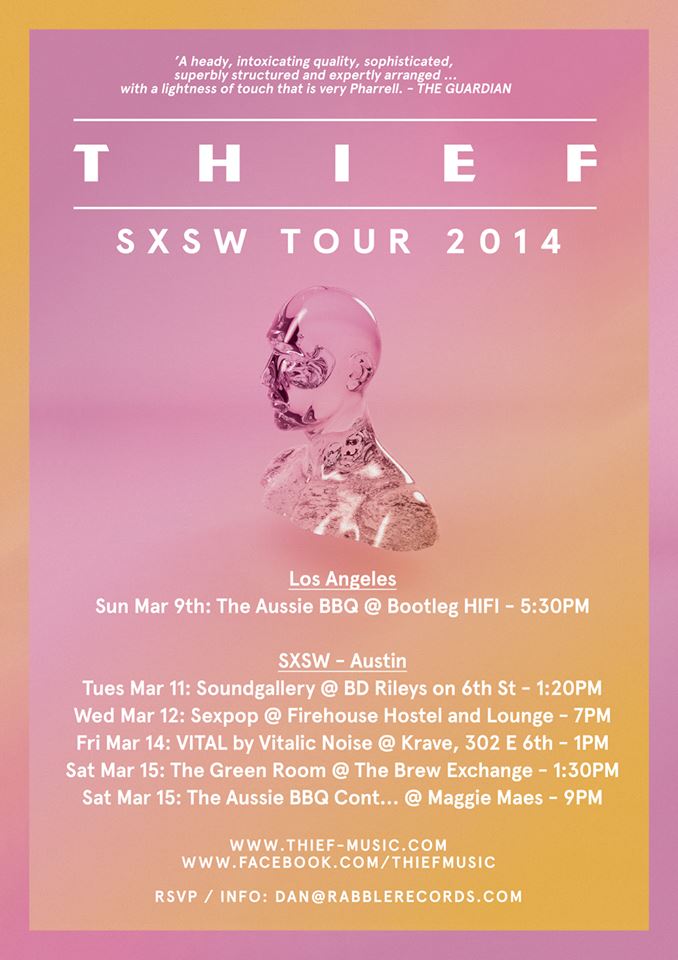