There's a scene in Forrest Gump that stands out like a boner in yoga class. Even among the classic movie's innumerable other flashbulb moments. Forrest has just returned from Vietnam as an unlikely national hero, and appears at a rally alongside an unkempt flag-clad protester styled after Abbie Hoffman, who introduces the film's aw-shucks protagonist to a crowd stretched across the National Mall. Technical difficulties ensue and prevent him from moving the masses, but the payoff comes soon after, as Forrest's hometown heart Jenny emerges from the throngs and runs to him from across the Lincoln Memorial Reflecting Pool. It's beautiful. The stuff cinematic magic is made of.

As a journalist who has spent some time in protest settings like the one simulated in Forrest Gump, I've seen such chance encounters come true. They're typically less dramatic, but it's not rare for a bohemian from one coast to randomly bump into an old acquaintance from another. These serendipitous encounters might not be so random after all; there are only so many compassionate souls who care enough to throw their bodies on the line, and as such, the attending reporters and crusaders – the lot of whom need protection in such volatile situations – preach and practice solidarity. Nevertheless, when those connections click on the fly, in the middle of a march or even a spate of violent and emotional arrests, there's an almost inexplicable comfort that stems as a result. In the middle of insanity, there's no place like home. Like Jenny in the shadow of Lincoln, leaping toward the safety of her old friend's arms.

If you said a decade ago that I would find a mentor who wears a boot on his head, I would have asked where the weed was. If you told me I would frequently run into that peculiarly hatted oddity in my travels as a wandering writer, I'd have asked you to surrender the acid. The first time I saw Vermin in action was way back in 2000, during one of John McCain's embarrassing bungled bids to become the Republican nominee for president. At the time, I was a graduate student trying to examine the political process up close, and I suppose I was also hoping to grow up a little. After working in restaurants and farting lowbrow jokes as a hack comic for two years, I figured it was somewhat mature and maybe even intellectual to drive up to New Hampshire for the first-in-the-nation primaries.

A performance artist and luminary method actor of sorts, that year Vermin was sporting some kind of ridiculous costume or another, loitering outside the Manchester hotel where Beltway stars and high office hopefuls crash during election season. McCain was stepping off his campaign charter bus – actually named the Straight Talk Express, hilarious as that may sound in retrospect – expecting to shake a few mittens and entertain supporters waiting joyously for his arrival. In their presence, though, was perennial candidate Supreme, wielding a six-foot tall toothbrush and yelling louder than the rest of the crowd combined: “YOU'RE MINE, MCCAIN! DEBATE ME RIGHT HERE! DEBATE ME RIGHT NOW!”

A New England native who lives in a suburban fun house north of Boston, Vermin spends the off-years engaging in various progressive causes and running for whichever local, regional, and state offices are vacant, and even some that aren't. After watching in delight as he derailed McCain's Straight Talk Express, I crossed paths with him again in 2004, as a new crop of haircuts swarmed the Granite State for another ceremonial round of quadrennial mayhem, and again four years after that. By then, Vermin had taken to strapping his enormous trademark black galosh to his melon, and to affixing a clenched Incredible Hulk fist to the front of his crotch. It was in said form that he emerged beside me in the back of a high school gymnasium in New Hampshire, and began heckling 2008 presidential wannabee Mike Huckabee and his diminutive yet legendarily pugilistic booster, Chuck Norris. “I KNOW YOU'RE NOT MAN ENOUGH TO FIGHT ME. LET'S TAKE THIS OUTSIDE, CHUCK. CONSIDER THIS A CHALLENGE!”

Peacemaker he is, Vermin survived his spat with Walker Texas Ranger. I too lived to tell the tale, though I did get booted from the gym along with candidate Supreme after the Huckabee goons decided to eject potential troublemakers, of which I looked the part. I've always considered myself more of a reporter than an activist, but sometime in the wake of the Chuck Norris incident, I began seeing Vermin in considerably more places, and as a critical ally. That was especially the case throughout late 2011, when the Occupy Wall Street movement broke nationwide, and he showed up on my route from New York to Chicago, more often than not in the midst of police wailing on peace activists. In those scenarios, Vermin is a one man buffer zone between protesters and storm troopers. Strange as it sounds considering his clown-like appearance, I've personally seen him defuse countless situations using wit alone. 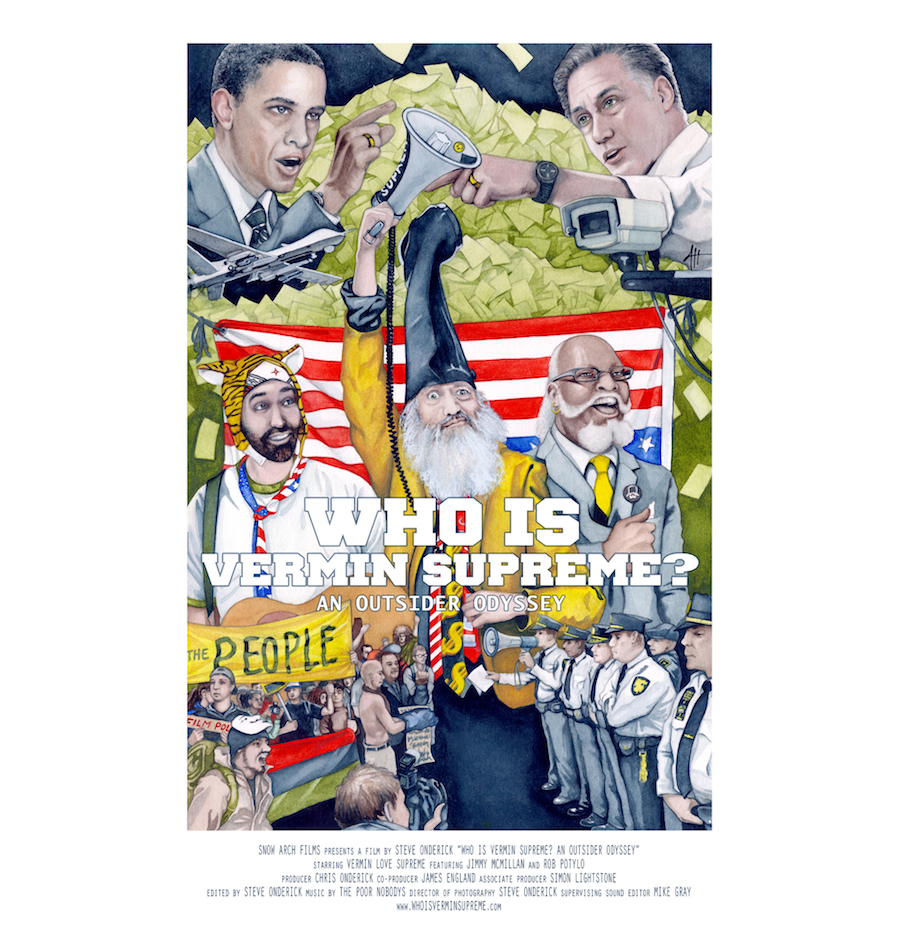 Our run-ins haven't all been on the brink of social apocalypse. I even saw Vermin on the streets of Austin in March 2012, on the third day of South by Southwest, America's hedonistic free-for-all and post-indie cultural extravaganza. We randomly collided on Sixth Street, in the middle of the booming hoopla. Under his boot, which I first saw from a distance, Vermin's bushy white beard was soaked with perspiration, while a large parcel of his comparably spongy chest hair was on full-frontal display. Despite the sight, strangers flocked toward Vermin to snap smart phone pics of them touching his hallmark headgear, which remains in place both at the frigid primaries and deep in the sweltering heart of Texas, where it served as an antenna summoning fans. Vermin's creative and political goals have always been, shall we say, abstract. But generally speaking, he appears to be on an extended quest to put smiles on faces. In that regard, watching teenyboppers giddily pose with him on Sixth Street, I realized how successful he's been. A lot of people can entertain in a controlled climate, but it takes a real genius to thrive in such pandemonium.

A few months after seeing him in Texas, I stood beside Vermin at the bloodiest scene I've ever witnessed, as broad-shouldered Chicago cops pummeled protesters outside the 2012 NATO summit. In those and other harrowing battles, he remained a fixture on the front lines, from the Republican National Convention in Tampa, to its Democratic counterpart in Charlotte, to Long Island, where I sneaked away from my grandmother's hospice bedside to check the protests outside a presidential debate between Barack Obama and Mitt Romney in late 2012. Watching Vermin and his sidekick, the Boston-based renaissance jester Rob Potylo, sing love songs to evangelical whack jobs and police officers, I laughed for the first time in weeks.

Like when he saved me and a fleet of other rogue reporters from the wrath of riot cops in Charlotte, the scene on Long Island hardly resembled Forrest and Jenny's Summer of Love reunion. For one, there was no reflecting pool. But as somebody who likes to experience art and life up-close-and-personal, it's something of movie moment every time a microphone or bullhorn echoes through a massive unruly crowd, and I look up to find a guy wearing a boot on his head hollering through the other end of it.

WHO IS VERMIN SUPREME? AN OUTSIDER ODYSSEY
Directed by Stephen Onderick