I was introduced to Brooke by a mutual friend, who just happens to be an editor at Vogue. She said I had to meet her. I am constantly being told that I have to meet someone or other and being that I am mildly anti-social, I usually just nod and offer some bullshit variation of “I’d love to,” and pray no one will remember.

However, when the introducing party is an editor at Vogue, one generally pays attention.

So I went to meet Brooke, for pizza.

And she was lovely. She was strikingly beautiful, with skin like a porcelain doll and black hair and bright blue eyes. Her beauty belied her darkness. I would soon learn that she was like a black widow.

We had barely finished introducing ourselves when she launched into a fascinating monologue about a series of paintings she was working on. She talked quickly and her excitement was contagious. She was effervescent and charming and funny and really smart. And while she was definitely not typical in any way, she seemed normal enough. Which is only to say she didn’t strike me as, well, dangerous.

Then again, we were eating pizza—Jeffrey Dahmer probably didn’t seem dangerous over pizza, either.

From there, we went to her studio and in the hours that followed, I wondered if my friend at Vogue was bat shit crazy. Brooke made Dahmer’s fantasies sound like a trip to Disney World.

But all fear that she would, perhaps, try to eat me dissipated the moment I entered her studio. Everything was so rich and luscious and the smell of oil paint and paint thinner was almost intoxicating. The walls were covered in giant canvases—gorgeous, sexy, reds and pinks and nudes and I couldn’t quite tell who or what they were, but they were so sensual and delicious—it was like Jenny Saville and Lucien Freud had a love child.

And then. . . I realized what I was looking at. Which felt sort of like thinking you are on a date and then realizing you are actually in the lair of a cannibal.

These were not paintings of nudes—not exactly, anyway. These were paintings of carcasses. As things came more into focus, I realized a rabbit here, a chicken there, perhaps a cow. . .rather than lovers bodies intertwined, Brooke was painting flesh. And for as taken aback as I was, I  had to admit, I had never seen dead animals look so sexy before.

I wasn’t sure what was freaking me out more, the fact that Brooke apparently collected dead bodies or that they were so mesmerizing.

I figured I had a pretty good shot at survival since she didn’t seem to paint or kill anything that actually spoke, so instead of racing to escape, I tentatively asked, “Do you, um, paint these from pictures or something? They’re so, um, realistic looking.”

Brooke looked at me, as though I had asked her the most idiotic question in the world. And then, as though she was giving me ingredients to make a cake, “God, no. I get bodies from my butcher and I paint them like they are live models and then, because they don’t last for that long, I photograph them and I paint them from the photographs.”

I threw up a little pizza in my mouth and said, “Excuse me?”

Brooke continued, “Yeah, and they are all organic,” as though this made it somehow normal that she was hoarding animal cadavers in her art studio.

Not able to think of anything else to say, the first thing that came out of my mouth was: “Don’t they smell?”

She went on, “The butcher knows I like the good looking animals, too, so he keeps those for me. He’s really wonderful.”

Was this girl clinically insane? I imagined her walking down the street with a skinned rabbit slung over her shoulder like a chic shoulder bag.

I was totally and completley fascinated. 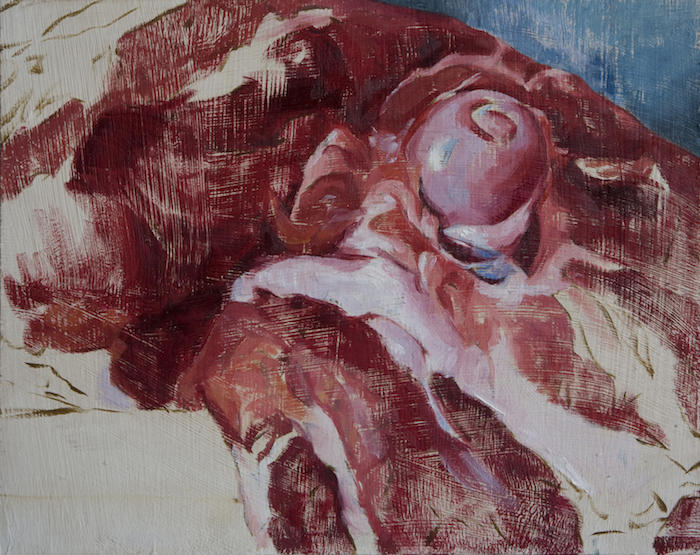 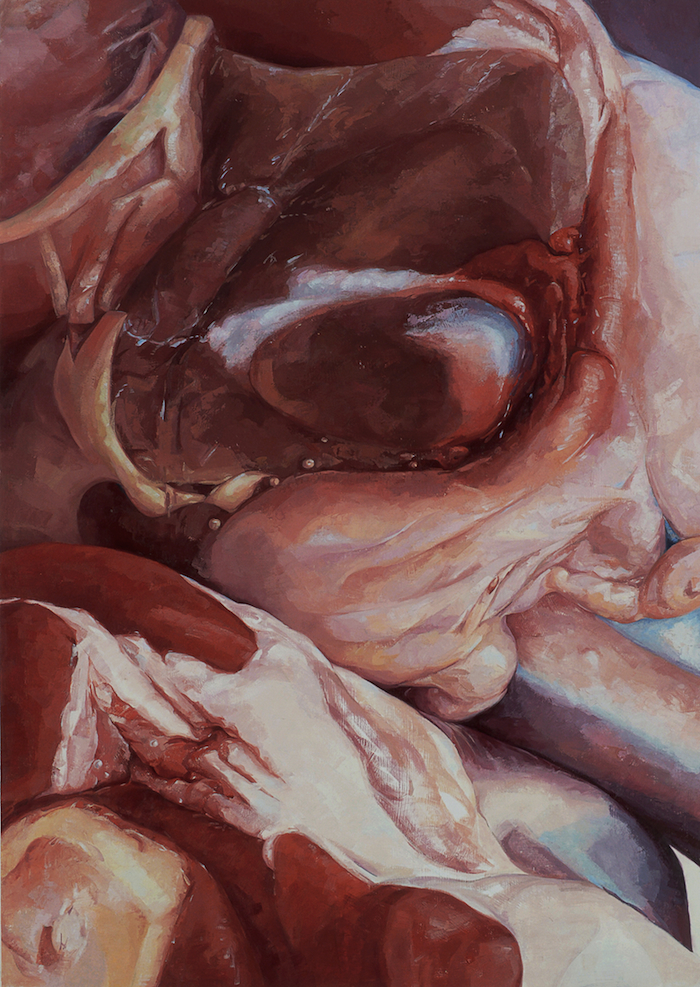 Again, as casually as if we were discussing the weather, Brooke said, “After I photographed them, I tried to give them away for consumption, because I obviously can’t eat my models, but no charity wanted them.”

Me: “Charities? What kind of charities were you trying to give them to?"

I imagined her trying to give a dead chicken or dead baby cow, still with heads, eyes and teeth, to the manager of the local Salvation Army.

Brooke looked at me as though I was retarded. “Food charities. But like I said, no one wanted them, so I started putting them in boxes. And then I wrapped with ribbon. Finally, I thanked them for their time and it became a little ritual we share. After they are boxed and thanked, I discard them in a dumpster.”

And then, she turned around and started to mix some paint.

There are several things that should be noted here, the first and not the least of which is that Brooke is a vegetarian.

The second is that you will never meet a more intense and passionate person. It’s not just that her art is her life, but that her life is art. She lives and breathes it every second of every day. And it comes through in her work, which is so mesmerizing and arresting, it is reminiscent of Mapplethorpe’s black cocks—you don’t even realize what you’re looking at until you’ve already fallen in love with the image and then, well, it’s too late—you’re hooked.

And finally, since that fateful day that started with pizza and ended with dead bunnies, Brooke has since expanded her repertoire to include food / art. The pieces she makes are stunningly beautiful and even though they are decadently delicious, I’m always a little cautious about consuming them.

I mean, the truth is, with Brooke, you really just never know what she could slip in there. Which is part of the fun, of course. 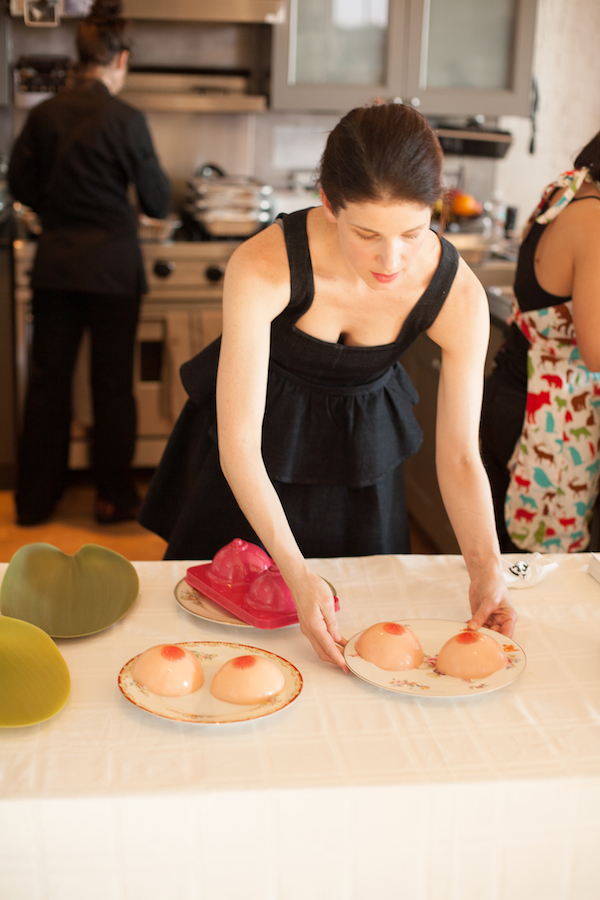 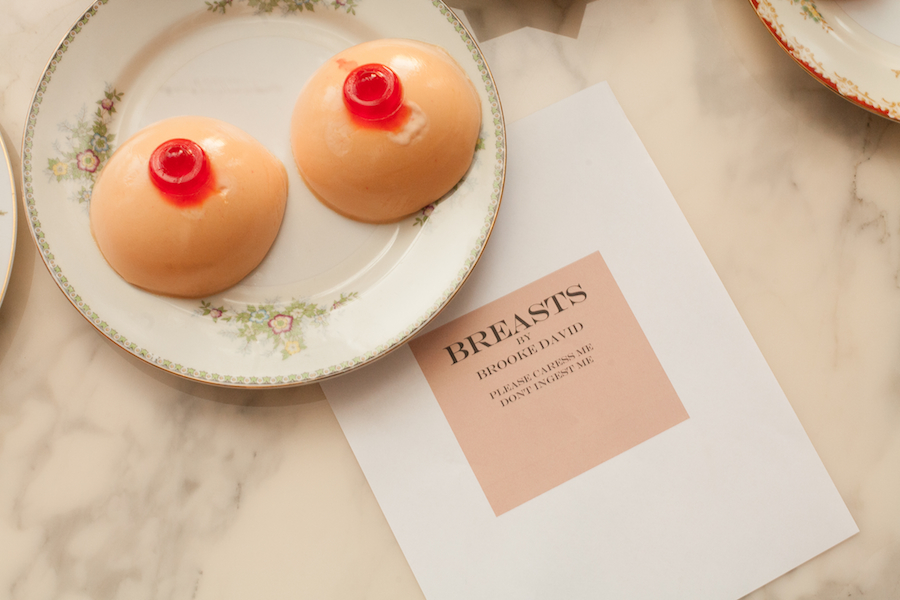