ob·jec·ti·fy: to express something abstract in a concrete way 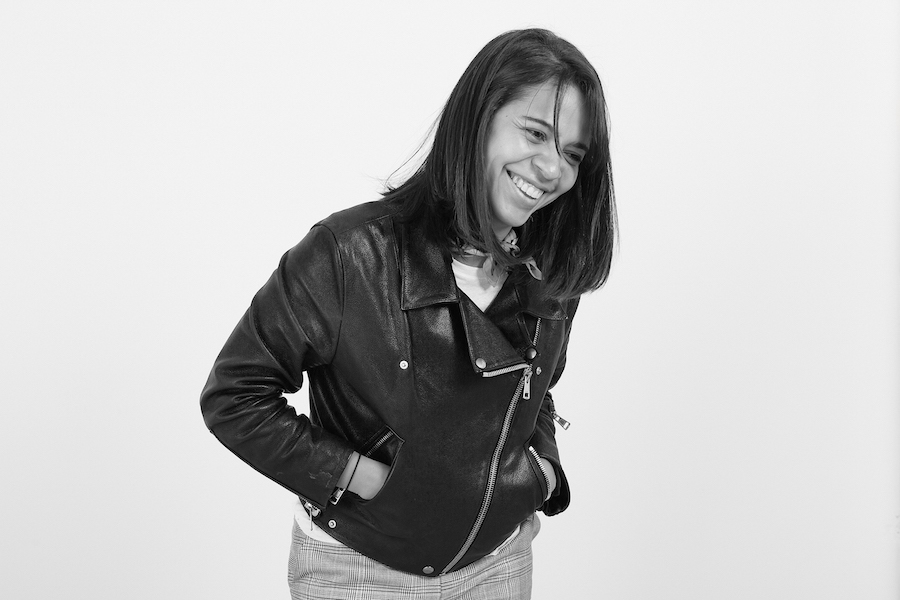 Rémy Bennett: How did the idea for Objectify 139 come about?

Maria Candanoza: Most of my friends were constantly creating art in their studios but it wasn't getting the chance to be seen. Sometimes you’re not ready for a show or you don’t have the opportunity to do a show, but it doesn't change the fact that you're still producing work all the time. There's just no outlet for it. The idea was to create an art/object store which was basically a place where people could showcase their work and have it for sale at affordable prices. We also have events once a month where we collaborate with different artists and every two months an artists curates a portion of the magazine/art book section of the store.

RB: The DIY art scene of the 80s had it's roots in this neighborhood and you’re, in a sense, preserving that legacy with Objectify 139 and paying homage. Were you inspired by places like Gracie Mansion and FUN Gallery when developing the concept and choosing a location for the shop?

MC: Yes! The history of the neighborhood was a major factor in choosing the location for the store. I considered others of course but it was very important for us to be in the East Village or the Lower East Side. I'm obsessed as are a lot of people my age with the nostalgia of NYC at that time and we want to root ourselves in this neighborhood as much as possible. ABC No Rio is right down the street, and yeah places like The FUN Gallery and Gracie Mansion were in the neighborhood. I think the energy of all those paces is still here in many ways. New York is constantly changing more so than any other place I think, but history doesn’t go away. The desire to create, the inspiration for us…for me at least is still here. 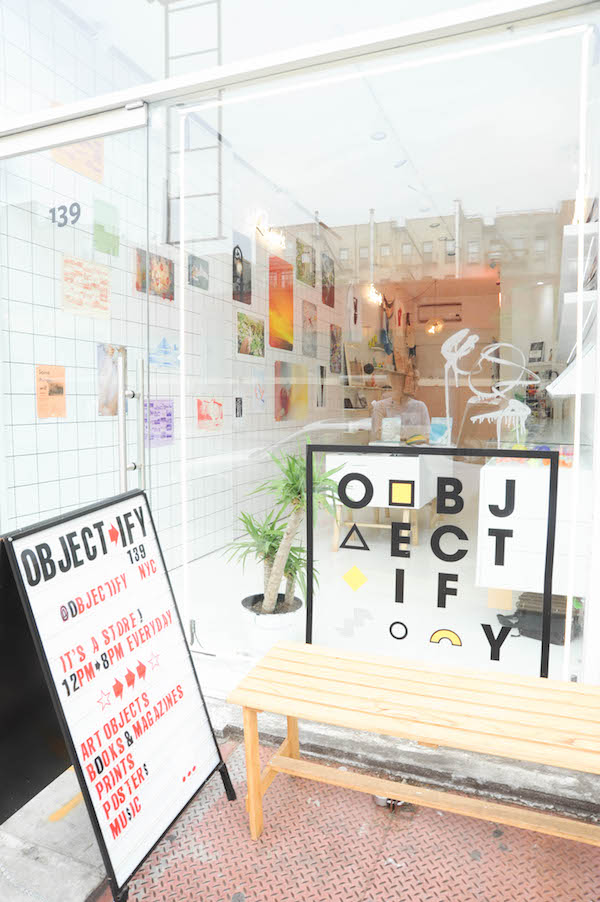 RB: Objectify 139 could be characterized as a sort of artist’s salon or collective, but what I'm struck by how functional it is.You’re cultivating a creative hub for artists and the community to convene but also a place for them to thrive as working artists. In this climate where there is such a huge disparity between the struggling and the elite I think it's pretty important to create a middle class of sorts for artists.

MC: Yes that was the idea. I wanted to make the art affordable for everyone. I want you to be able to buy a $20 print by an amazing artist and stick it on your wall with tape or buy a $300 frame for it if you want. It's up to you. And in terms of creating a platform for emerging artists a good example of that is when I asked my friend Priscilla Young to create a window installation. She’s constantly creating in her studio without a place to show. When she did the window in December it looked great and she was able to invite people to the shop to see it and from that she started getting studio visits. I’d also love to start having an open submission process so people can email us and we’d be available for artists to reach out to. When I first graduated from college I was interning at galleries and people would come in ask to submit their work or drop of resumes and portfolios and they would literally be thrown in the garbage. That just made no sense to me. How were people supposed to get their name out there with that kind of system? I saw a need for something different.

RB: You’ve also mentioned that the art collective Colab was a big influence in terms of creating that progressive model.

MC: Yeah my sophomore year at SVA I took a class called “The Eye on the East Village” and learned about Colab and became obsessed with the idea of what they did. They had such an amazingly well formed and productive collective, and that’s pretty much the dream. They did it all. TV shows, All Color News, Potato Wolf and Red Curtain. They had a magazine and x motion, but what caught my attention was a store that they opened on Bowery where they sold “cheap” art objects in edition. I thought that was such a great idea and that there weren’t many places like that in New York really. The idea of artists being able to sell work in that setting was very unique to me.

RB: You spoke to me about how Tom Otterness and Kiki Smith used to make little sculptures around the holidays and sell them as gifts for like 10 bucks.

MC: Yeah even when these artists were gaining recognition they would still make these little art objects and sell them for cheap. Actually the first week that objectify was open the sculptor Tom Otterness came in and said that the store reminded him of Colab and that he could tell it was an artist-run space, which to me was a high compliment. 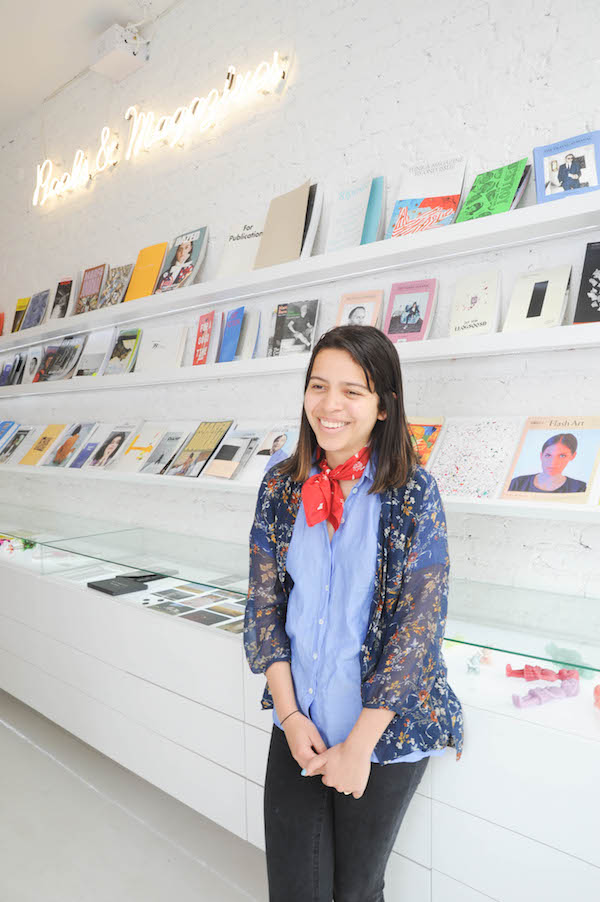 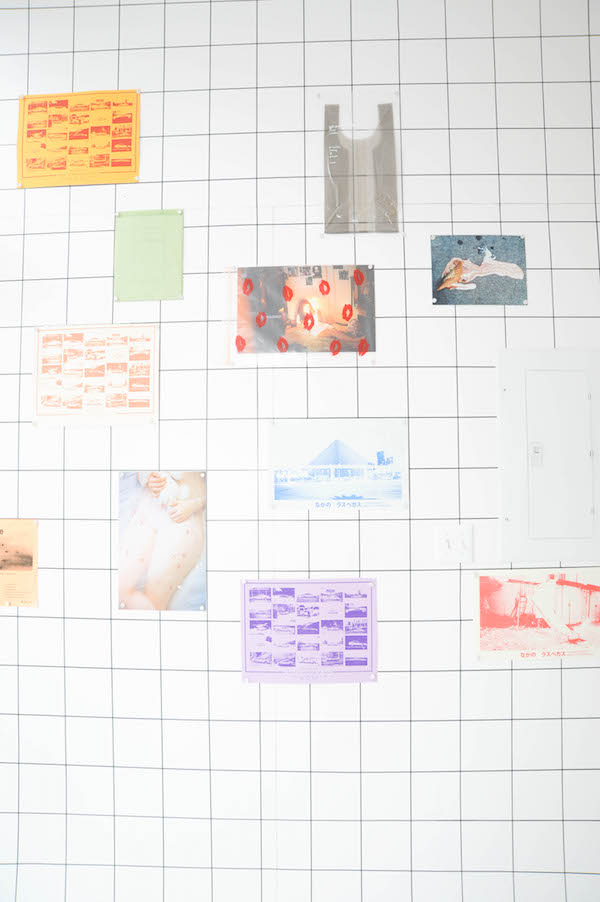 RB: I also love how you create packages or kits for each artist collaboration and have them for sale. The first show I went to here was the Petra Collins collaboration between her and 'Me and You’ and I was struck by the amazing attention to detail in creating these kits with the artist’s work included. It's great that people can take something home with them after an event that represents the artist they admire and that is sort of a keepsake from the actual event.

MC: The show with Petra was where we initially came up with the idea of making the kits. We were doing a collaboration between Petra, Objectify, and ‘Me and You’ so we each contributed something to the kit. ‘Me and You’ did the stickers and the feminist underwear and we did the pins and Petra had a poster in there. When I first talked to Petra about the idea she was really into it cause a lot of her fans are teenagers and young girls who’d never be able to buy her work in a normal gallery.

RB: The upcoming book selection is being curated by The artist B Thom Stevenson. Can you tell me a bit about it?

MC: Black and Read and White and Blue is the name of the show and it’s a mixture of rare finds by his peers along with a few of his influences. Much of the works are self published in the New York area and were produced in very small runs such as Nick Sethi's hilarious HCO, and the darkly paranoid Transfer Call by Collin Willis. Others have been put out by larger institutions, such as Steven Parrino by Vincent Pecoil for Gagosian Gallery — a posthumous cataloging of the artist work. The combination of blue chip established artists and emerging talent has something in every price range.

RB: Your other artist collaboration for June is with the photographer Chad Moore. What is that event going to consist of?

MC: We're doing a book launch for Chad Moore’s Zine called June. It’s going to be a limited edition very special book with a lot of little details. The last book he put out was printed in Germany and was super nice and cost 45 bucks, and was a big deal. But we want to help people to keep putting things out regularly so we decided to do a small zine and make it like an art object. We’re doing a silk screen cover and in the middle having three ristographic posters you pull out, and it’s gonna be bound with rubber bands. We’re all binding the book ourselves. It’s gonna be fun. We’re making an edition of 200 of the books and having them for sale.